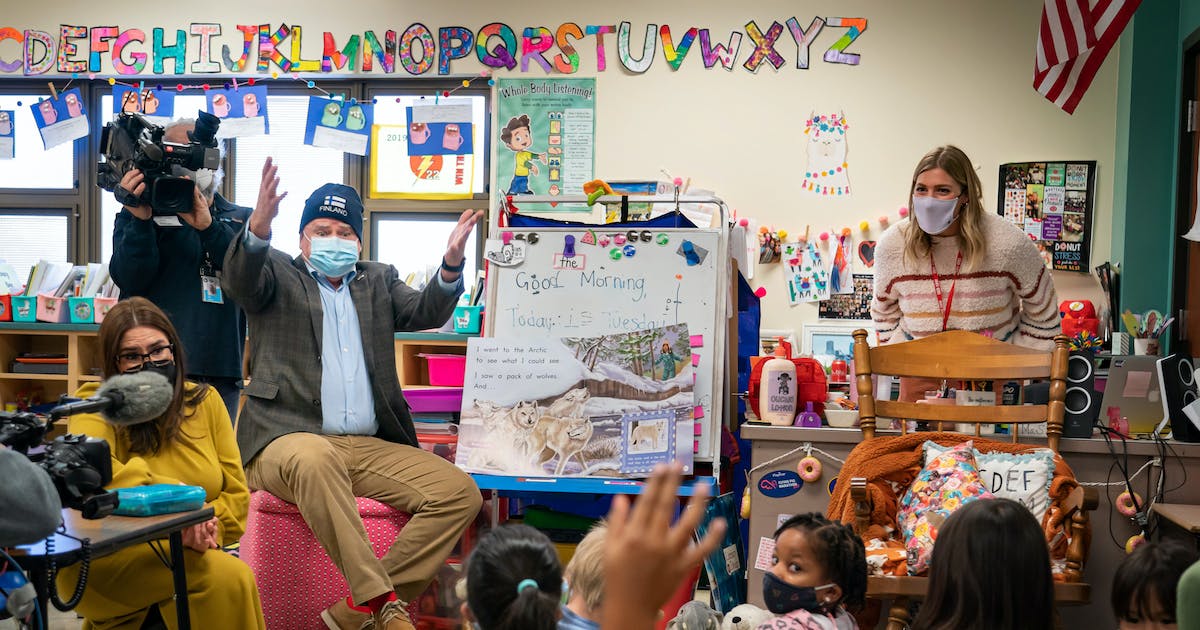 INVER GROVE HEIGHTS — Kindergarten teacher Kenzie Schroeder’s class was half full when Governor Tim Walz stopped by to read a book about the Arctic on Tuesday. COVID-related absences had forced another return to digital learning.

Hilltop Elementary School principal Dave Lostetter, who had a two-week-old baby at home, watched the scene. His family had struggled to find daycare and got the latest opening at a center he said was convenient but expensive.

The Inver Grove Heights school that Walz visited on Tuesday was a microcosm of struggles unfolding across the state. Tired teachers continue to experience pandemic shifts, parents juggle work and quarantined childcare, childcare costs are high, and there are too few providers.

The DFL Governor stood in front of a climbing wall in the school gymnasium as he presented his spending wish list to meet these challenges. Walz’s family and children-focused portion of the supplemental budget, which he rolled out in installments, would total $5.1 billion over three years, budget officials said. It includes a 2% increase in the state’s general education funding formula, as well as paid leave programs for workers.

“That’s why I ran for governor. To be honest with you, I didn’t plan to be a public health expert,” said Walz, a former high school teacher.

The state’s projected $7.7 billion budget surplus gives state leaders wiggle room for additional spending when lawmakers return to the Capitol on Monday for the next legislative session. But many elements of the governor’s proposal face a rocky road in the divided legislature.

“Last year, Senate Republicans passed record funding for schools; a 2.5% increase this year, a 2% increase next year, and Minnesota schools received $3 billion. of Congress,” Senate Education Committee Chairman Roger Chamberlain, R-Lino Lakes, said in a statement. “Injecting more money into schools without addressing literacy and allowing children and educators to catch up is the wrong direction.”

Chamberlain listed expanding a training program called Language Essentials for teachers of reading and spelling, which was not in Walz’s plan, among his top session priorities. Chamberlain also noted that he wants parents to be included in curriculum decisions and “have the freedom to choose the best school for their child.”

Senate Majority Leader Jeremy Miller, R-Winona, said the amount of money the state is spending on students hasn’t produced good results and his caucus wants to look at different approaches. He also said they wanted to “get back to basics” in the classroom and focus on areas such as reading, math, science and American history.

House Democrats, meanwhile, said on Tuesday they had identified billions of dollars in education needs, including more than $2 billion for early learning and teacher salary increases, $870 million to fully fund special education and English language learning programs and $55 million to freeze tuition. at colleges and universities across Minnesota this year.

They signaled support for Walz’s education, paid leave and childcare funding proposals, but DFL leaders said they would work on specific plans during the session. House Speaker Melissa Hortman, DFL-Brooklyn Park, said they proposed more funding for education in the last two state budgets, but ultimately agreed to less spending for make a deal with Republicans in the Senate.

“Our compromised budget was insufficient,” she said. “Now we have the opportunity to go back to those areas and invest.”

In previous sessions, Senate Republicans and Democrats have clashed over whether to pump more money into public schools or spend money on vouchers for private schools. House Education Finance President Jim Davnie, DFL-Minneapolis, said the voucher proposals “do not align with the needs of the state or our moral obligation” to public schools.

House DFL members and Walz stressed that the state needs to make changes to address the high cost of child care. The governor has offered higher payment rates to providers to cover more of the cost of providing care, which he said would increase access to affordable care for 30,000 children.

Other aspects of the governor’s proposal include expanding access to pre-K to serve an additional 6,000 children, providing free breakfasts and lunches at schools, and spending $77 million on the over the next few years for student support staff, including counselors and social workers.

Walz also wants Minnesota to follow other states that have added paid family and medical leave requirements, which ensure workers can take time off when they have a serious medical condition, if they need to care. of a sick family member, are recovering after childbirth or in other situations.

He also proposed a sick and safety leave plan, where workers could bank up to 48 hours a year for short-term needs like caring for a child while a school is closed or commuting. at a doctor’s appointment.

People would pay to cover leave costs, like an insurance policy, Walz said. He argued it would benefit businesses in the long run by helping them retain employees.

“What that looks like, we’re ready to work with the Legislature to figure it out,” Walz said.