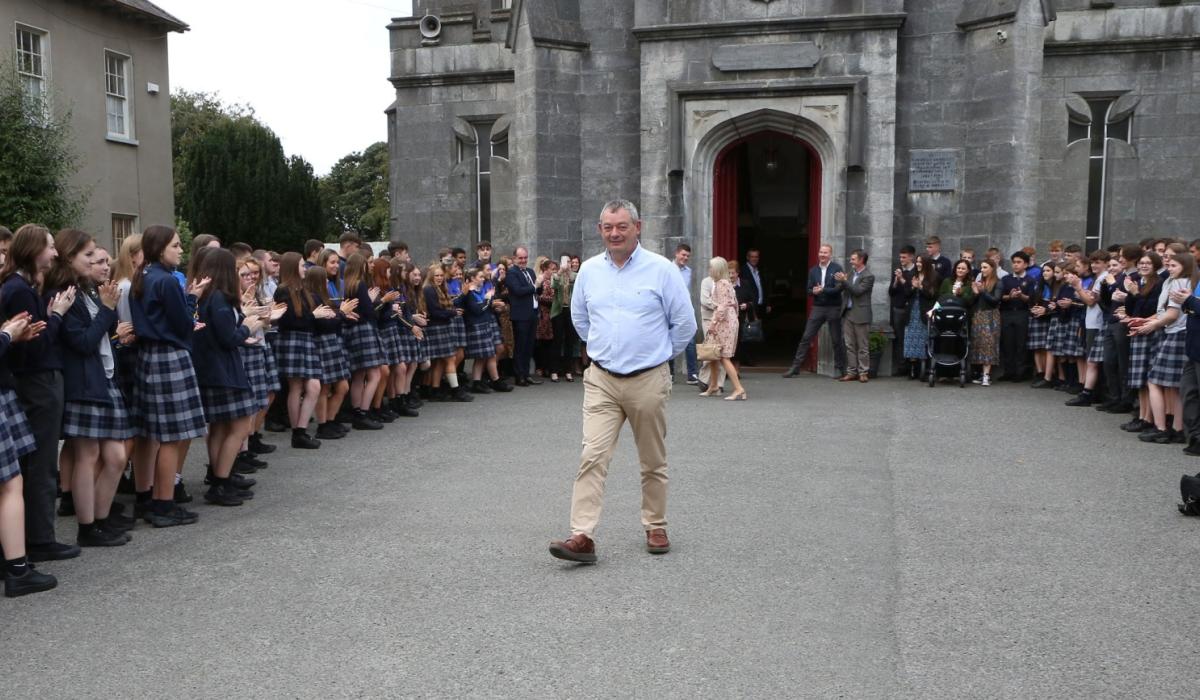 A high school Laois Offaly managed to surprise his headmaster last week with a cute goodbye gesture, which even his family is in on the secret about.

Seamus Bennett is retiring as manager of Coláiste Iosagáin in Portarlington, after 22 years.

Last Tuesday marked his last time to attend mass celebrating the start of the school year, in St Michael’s Church up the road from the school.

The nice surprise was that her family sat in the front row of the church waiting for her, and then all the students lined their way back to school, cheering and clapping with big banners made house wishing him a happy retirement.

Below: Father Joe O’Neill with Seamus Bennett and his family after mass at St Michael’s Church in Portarlington. Photos: Michael Scully.

“It was lovely, a total surprise. It was wonderful that my family was also there, especially my 83-year-old mother Agnes,” Mr Bennett told Leinster Express/Laois Live.

There was also his wife Paula, son James and daughter Emer, with another daughter Niamh out of the country and son Peter at college.

Below: Seamus Bennett and his family surrounded by Colaiste Iosagain staff, during his school retreat. 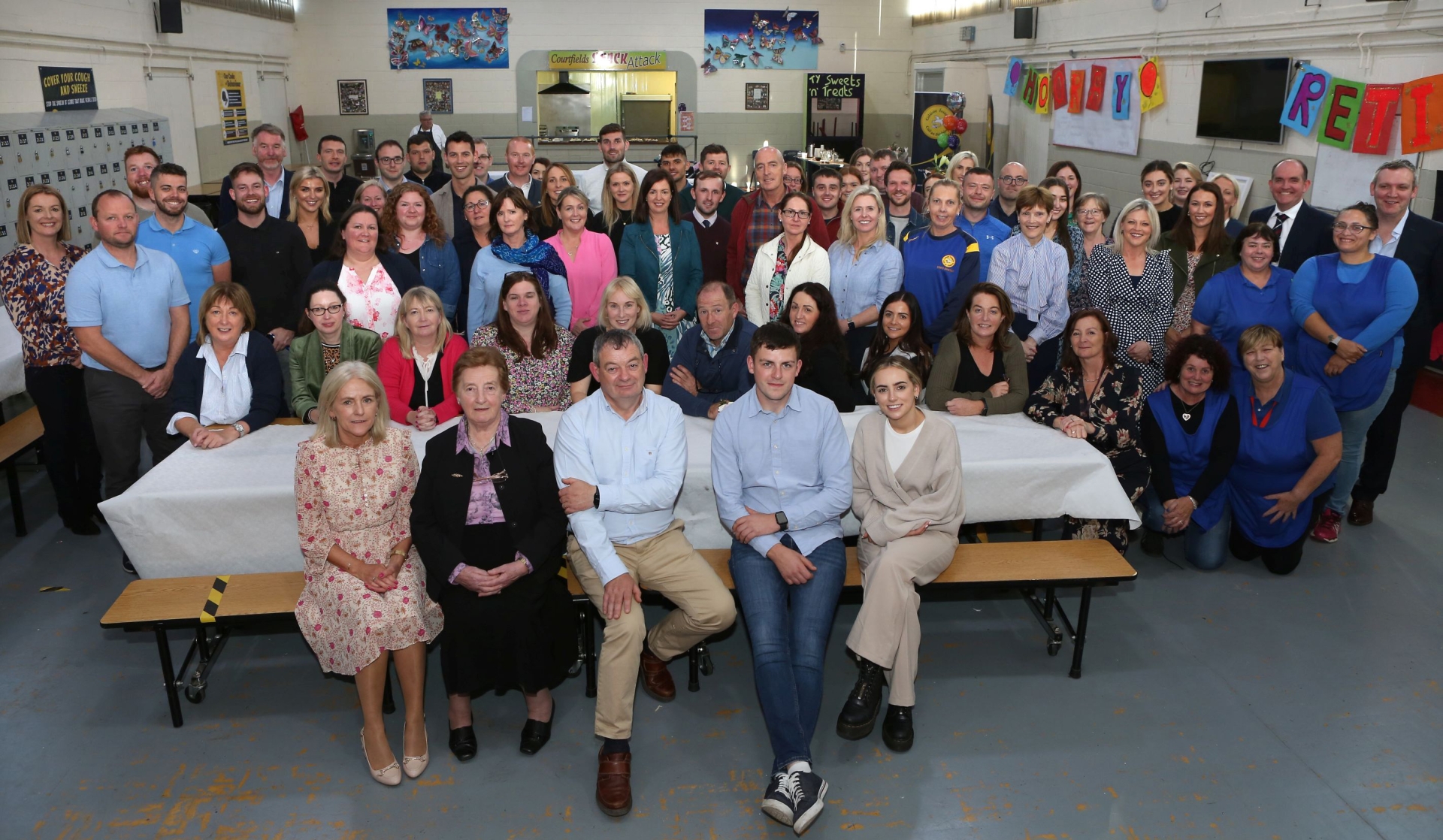 Mr Bennett, from Mountrath, has spent most of his teaching career in Laois, after two years teaching at Blackrock College. He taught at Mountrath Convent School, then spent ten years teaching at St Mary’s CBS in Portlaoise, before taking on the role of Principal at Coláiste Iosagáin when it opened in May 2000.

“I am a very proud Laois. Laois is the school’s address, although it is technically on the Offaly side of Portarlington. Our post arrives one day later if Offaly is on the address. Most of our students are from Laois as most of the city is in Laois. But we cover a huge area with students from Walsh Island and Geashill to Ballybrittas and Emo. Most of it is Allen Bog, so it’s sparsely populated,” he said.

The school was a merger of St Joseph’s CBS Girls’ School and Scoil Mhuire Presentation, with the vocational school closing at the same time and all secondary school students in the town meeting in the Scoil Mhuire building to form the new school.

“We are eagerly awaiting the start of construction of the new school. He is ready to leave for the building permit, we were told six months ago. Then it will go to the bidding for builders. Hopefully this will go forward. If the current economic situation does not affect it, I hope it will move forward soon,” Bennett said.

Below: Pupils at mass celebrating the start of the 2022/23 school year at St Michael’s Church. Photos: Michael Scully 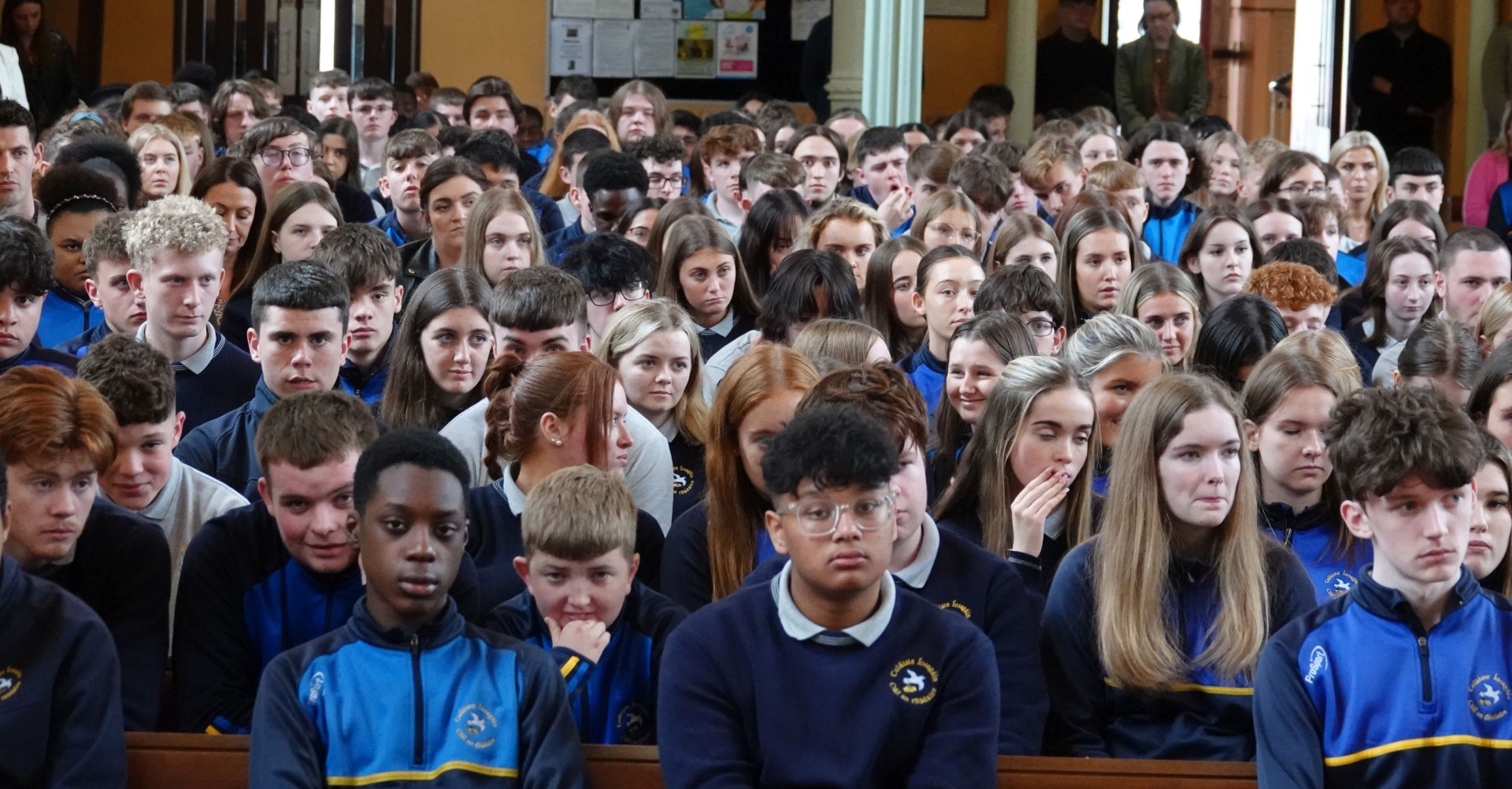 The new building has been a long wait, with overcrowding in hallways and prefabs highlighted in the past as the school campaigned for facilities.

“We’ve been talking about it for seven or eight years. In all honesty, we got all the prefabs we asked for. We have the spaces now, it’s just that they’re all separate units and it’s a distance to go around them. Half of the school is prefabricated. We got the home economics, carpentry and DCG prefabs we requested,” he said.

Its assistant manager Justin Brown has been announced as the replacement manager.

“I’m happy for him. I actually taught him math at CBS Portlaoise. He was very bright, he studied business and he takes care of the school accounts. He is in good hands, it is even very reassuring. Now we have to fill another assistant manager position in three or four weeks.

“I will definitely miss it. Many of the staff are more than colleagues, they are also friends. I will keep in touch but I will leave the freedom to the new management to do things on their own,” he said. he declares.

In addition to a new assistant manager to replace Justin Brown, another replaces Siobhán Higgins who retired as DP last June. Seamus praised his contribution.

“She had a very active energy, she knew all the students and was also excellent in her pastoral role. Everyone respected and trusted her,” he said. 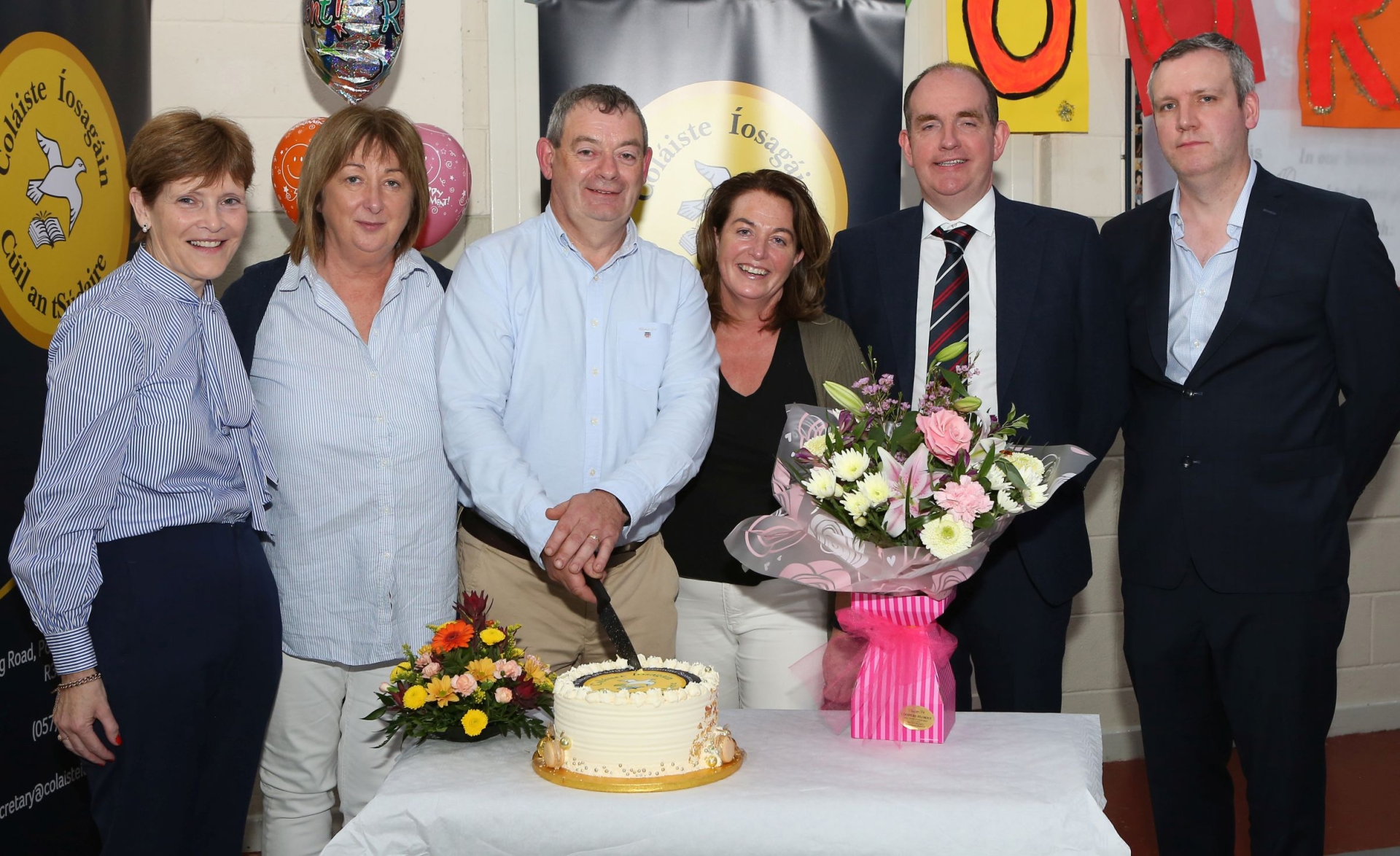 He is looking forward to returning to his childhood job, working on the family farm in Mountrath.

“My dad was a farmer and I’m delighted that my son James has brought the farm back to full dairy production so I’ll be farming with him. I helped my dad when I was young so it’s come full circle but with a lot more technology now,” he said.

The principal looks back at the biggest changes at Coláiste Ioságain since the turn of the millennium.

“Having three assistant managers share the workload and management relieved some of the pressure. Another big change was the promotion structure moving from the older system to a merit system. The new junior cycle has also been a big change, and there is a new focus on child protection, and rightly so. »

He was never a fan of corporal punishment.

“Children rightly expect to be treated with respect and I think we do now. The old style of yelling and corporal punishment doesn’t work, it creates resentment. If you resort to that, you lose .

“Over the past 10 or 15 years, the SNAs have come in, and we now have two ASD units. They act as a refuge, the students are mostly in ordinary classes. It’s a good thing, they are integrated into society.

“Resources have also improved, we have a lot more money for computers and specialized equipment. For parents, we are aware of fuel costs, so we have an easy payment system. I think we should be a DEIS school as the only provider in the area and with a good percentage of families with medical cards, but I think our results and retention are too good,” he said. declared.

Portarlington may well need two secondary schools in the future.

“The new building will serve the city for a long time. The numbers are likely to stabilize. 1300 is probably the maximum a high school should have. Beyond that, I see merit in two, but maybe middle school and high school,” Seamus Bennett said.

C Fund to pay for road projects; courthouse repairs, other work in progress