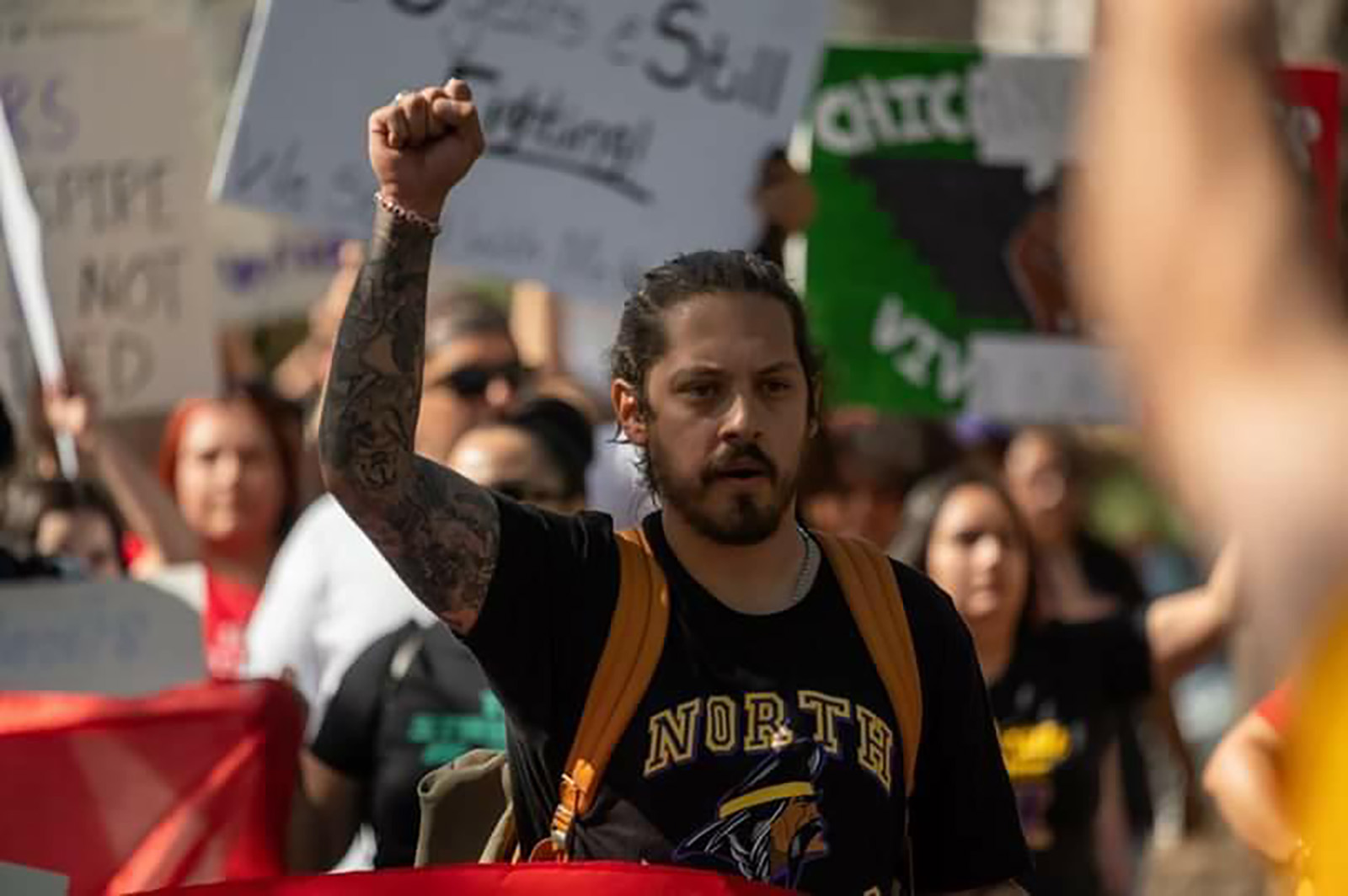 Local newsletter is your free, daily guide to living in Colorado. For the locals, by the locals. Register today!

Tim Hernández, a former North High School teacher and outspoken advocate for students of color, left a lasting mark on his students before Denver Public Schools (DPS) let his contract expire this past school year. With a new teaching job at Aurora Public Schools, Hernández reflects on his time at North, the student strike protesting his departure in May, and the scoop on what students can expect from Freedom Literature, his radical program. and self-designed.

Editor’s Note: The following conversation has been edited for length and clarity.

5280: Despite the glowing testimonials of several of your students, DPS refused to renew your contract, which I believe is quite rare. The official district explanation was a statement about your interview performance. Can you explain this to me?
Hernandez: In January 2021, I was hired for a traditional teaching position. But in May, after teaching the first semester, I was approached by headteachers who said, “We don’t have enough money to keep you full time. Will you accept this one-year associate contract? The primary goal of the Associates Program is to attract young teachers, teachers of color, get them into school, provide them with professional development, and retain them. I accepted this position because all of the associate teachers who had taught at North High School except me were accepted. Each.

Why do you think you were the exception?
Because white school leaders didn’t like the ways I was advocating for students. As a first grade associate teacher, I was elected to the school leadership team. Out of 160 people, I was one of three elected staff [by other staffers]. This meant that I had a first-hand role in shaping school policy.

When the school was randomly closing the toilets and the students were having periods, I went to the school management team and said, “Hey, we should re-evaluate that toilet policy; we need something that works differently. On my third day at North, I received an email showing a screenshot of camera footage asking us to identify students we recognized for an unnamed purpose and offering a bounty [essentially public praise] if we could name the student to all staff. And I openly said, ‘I don’t agree with that. It’s surveillance; it is the maintenance of order; it is criminalization. How is that restorative? We were asked, as an entire team, to document any time a student wore red, a Nebraska Huskers hat, a Chicago Bulls jersey, anything like that, and I openly said, “C is racist. This is how gangs actually work. They didn’t like being told what they were doing was racist.

In just one year at North High School, you seemed to have made a strong impression on your students, many of whom marched in your favor when they learned of the district’s decision not to renew your contract. Why do you think you had such a strong bond with your students?
I think there are two things. One is who I am. I look like my students. I speak like my students. I dress like my students. I’m not just a 40 hour a week teacher. I saw my students at the grocery store. I saw them in church. I saw them at their community programs. I saw them when I was walking around the neighborhood with my partner. I lived their experience. I’m from the Northside.

The second part is what I taught. I designed both the first Latinx Literature course and the very first Latinx Leadership at North section. The school was unwilling to fund me for the books I wanted, so I collected money from the community. I did everything myself. I taught them colonialism, indigeneity, chicano muralism. I spoke to them about very real issues related to the experiences they were going through. And I taught them what we could do about it.

You recently got a new teaching job at Aurora Public Schools. How was the process to get the job?
I will try not to cry. The story begins with the walkout. The students who organized for me were the greatest blessing I could have received from young people; of anybody. At the risk of being arrested. They flew a police helicopter over my children as they walked through the streets. And when my students were planning their outings, I couldn’t talk to them or help them because they knew if I did, I’d be in trouble.

So when they started to organize, they met at one of their peers. The student’s father, a Northside Chicano, cooked them pozole and left them to organize themselves in his house. This father was also the Principal of Aurora Public Schools. And so when the walkouts happened, when I was put on administrative leave and it was very clear that I wasn’t going back to DPS, he reached out to me and he was like, ‘Look, I’ve already seen everything you can do’. I let you teach whatever you want. You can come to our school. Please help me transform our school.

And you will give courses there in the literature of freedom. What will it look like?
I teach four sections: two of them are black freedom literature and two of them are Latin freedom literature. The program I designed has three goals: to examine the systems that have inherently deprived our freedom in this country; how our communities have historically made themselves free; and what that freedom looks like to us now.

So Freedom Literature students in the black section will read things like Back home by Yaa Gyasi, which is a wonderful book told from the perspective of a slave woman and a woman from mainland Africa, who are both members of the same family tree. I will also teach Between the world and me by Ta-Nehisi Coates to discuss how we reclaim our own power and narrative.

For the Latinx section, we will do a research unit on Indigeneity, Colonialism, and American Imperialism, using novels like In the time of butterflies by Julia Alvarez on the Trujillo regime in the Dominican Republic destabilized by the United States in the 1960s. In the second semester, we will explore the history of the Chicanas and Chicanos of Colorado through Sabrina & Korina, the collection of short stories by Denver-born writer Kali Fajardo-Anstine. And finally, we will have a joint unit to end the year with the Chicano/a/x Murals of Colorado project, in which students will design an original mural dedicated to freedom. A Chicano muralist will choose one of the murals and paint it with the students.

When it comes to American history and slavery, many parents across the country are fighting to keep politics out of the classroom. Is this even possible, or is the act of teaching always political?
Education has always been political. Politics is already in the classroom. The policy dictates how many dollars we get, which indicates what kind of resources, like desks and books, we can buy for our children. It is not an educational decision. It is a political decision. Someone approves a budget for that. It is a political decision to say which program we are going to teach. It’s a political decision to say ‘Who do we want to teach this to?’ What we’re seeing is that teachers are starting to realize that they don’t have to align themselves with a policy that doesn’t serve the communities they come from or the students they work with.

I am not interested in teaching the political reality that we have inherited. What interests me is to teach the political reality that we want. And, unfortunately, it is disturbing. Unfortunately, it’s not the nicest and most comfortable thing, is it? But what we forget about anti-racism is that if racism is uncomfortable, anti-racism must be inherently uncomfortable. ‘Cause if we don’t disturb anything, then what do we do? What are we talking about?