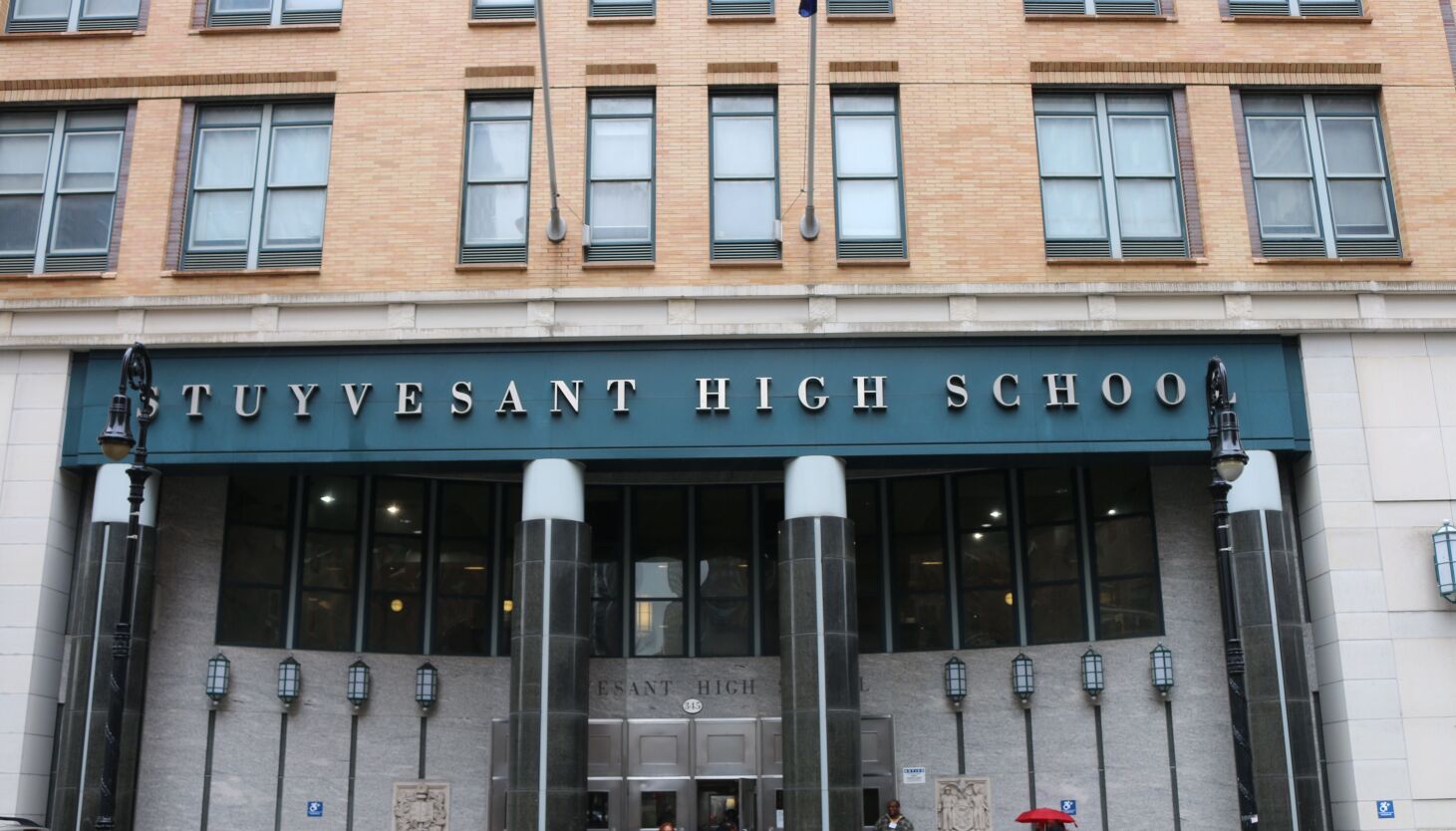 A task force tasked with rethinking how New York City distributes school funding released recommendations on Friday that could help change the way hundreds of millions of dollars are distributed to more than 1,500 public schools.

Many of the proposals would have implications for a wide range of schools if adopted, including increasing funding for campuses that serve more homeless students and those living in poverty.

Other recommendations would impact a relatively small set of schools but are nonetheless likely to spark controversy, including a proposal to eliminate a special funding increase at 13 of the city’s most selective high schools.

None of the ideas are binding – it is now up to Schools Chancellor David Banks and Mayor Eric Adams to decide whether or not to change the city’s funding formula for the next school year. The release of the report may create political pressure to act, as a previous task force convened under the last administration collapsed before officially releasing recommendations.

But enacting the task force’s proposals would either require a large influx of new funding or major cuts to some campuses, both of which would face political hurdles.

The task force report focuses on the city’s “fair student funding” formula, which channels about two-thirds of the money that goes into school budgets. Schools typically receive a base amount per student — this year it’s about $4,197. Students with additional needs — including people with disabilities, English language learners, and students with low test scores — come with extra dollars on top of the baseline.

The city’s funding formula is among the most progressive in the country, but proponents have long called for tweaks. The latest task force was created after the city’s Panel for Educational Policy, which is largely appointed by the mayor, took the unusual step of voting against the funding formula for this school year. Although the formula was later approved, officials promised to launch a working group to solicit feedback.

The report’s proposals would cost between $375 million and $983 million, depending on the specific combination of recommendations included, according to Department of Education figures.

Without additional funding, directing more money to some campuses will necessitate cuts to others. Larger schools and those with fewer low-income students would face significant cuts under this, according to the city’s projections. This could be a political no-start, as the vast majority of schools are already facing cuts due to declining enrollment.

Alternatively, the city could allocate new funds to city schools to pay for the changes to ensure they don’t cut into school budgets. But senior officials have already signaled they plan to make across-the-board cuts to city agencies, including the education department.

In a letter to task force members, Banks wrote that the Education Department would evaluate the proposals “in the current fiscal environment” and use the recommendations to apply the formula “most fairly for next year.”

The city’s teachers’ union – which participated in the task force alongside parent leaders, policy experts and advocates – raised concerns about how the proposals would be funded in the days leading up to the release of the report, according to a copy of a letter to another task force members obtained by Chalkbeat.

“Given the losses our schools and students have suffered in recent years, the last thing the system should be doing is setting up a ‘Hunger Games’ scenario that will pit school against school,” Michael wrote. Mulgrew, union president. “The plan must include a disclaimer that will prevent schools from seeing their budgets cut if these recommendations are adopted.”

Jasmine Gripper, executive director of advocacy group Alliance for Quality Education and co-chair of the task force, said questions about how to pay for proposals were a source of tension within the group.

“What we’re trying to do is direct more resources to the schools that have the greatest need and we don’t want to rob Peter to pay Paul,” she said. At the same time, “there are people who think the system doesn’t need more money, it just needs to be better distributed.

Gripper added that the task force only had three months to come up with proposals, limiting the group’s ability to conduct a comprehensive review, although she said the current recommendations were a good start. The report also proposes that the group continue to meet.

For now, though, here’s what the task force’s current recommendations would do:

Channeling more money to homeless students and those living in poverty

Nearly 10% of the city’s students live in temporary accommodation, including a recent influx of migrants from South American countries. Although some federal funding is allocated to homeless students, the city’s formula does not provide additional money for these children. The task force wants the city to change that.

The Department of Education should increase the base amount of per-student funding from 12% to 24% per homeless student, the report recommends, which would cost between $43 million and $86 million. Without new funding for this change, the city projects that the new burden of homeless students would shift funding from approximately 700 low-poverty schools to those with higher poverty.

The report argues that additional funds are needed to combat chronic absenteeism, higher dropout rates and intense stressors related to housing instability. Principals can spend the money allocated through the funding formula as they see fit, but the report suggests that principals use it to hire additional social workers or partner with community organizations – groups that often provide social services, outreach, etc.

Children living in poverty – about 70% of the student population – should also receive additional funding, the report says. The city already allocates additional funds to low-income students, but it is limited to schools that serve students below fourth grade. Raising the poverty burden, even modestly, is expensive — between $138 million and $276 million, depending on how aggressively it is raised — because such a large percentage of students come from low-income families. .

The city’s funding formula is designed to send additional resources to schools that enroll students in need. But a group of 13 elite high schools — serving relatively few black and Latino students, English learners, or students with disabilities — are getting a special bonus. This year it’s about $1,049 per student.

The report recommends eliminating extra funding to those 13 schools, which include eight specialist high schools that admit students on the basis of a single exam. Instead, the city should distribute that money, about $26 million, “to support advanced courses for more students,” according to the task force.

Funding for city schools should primarily bring more resources to students in need, and “a weight for specialist college high schools does not necessarily align with this overall vision of greater equity,” the recommendation says.

The report does not specify precisely how to redistribute the money. The proposal is likely to prove controversial, as the move would cut funding for some of the city’s best-known and most politically connected schools, including Stuyvesant (which would lose $4.3 million), Brooklyn Tech ($8 million ) and Bronx Science ($4 million). ).

New funding for schools in need

With few exceptions, the city’s funding formula allocates funds based on the number of students rather than to specific schools. But the task force recommends that the city add a new funding stream specifically for schools that serve unusually high concentrations of homeless students, people with disabilities, English language learners, homestay students and those from low-income households.

“Schools that serve students with a greater myriad of needs need more resources to support these populations than individual student level weightings provide,” according to the report.

The top third of schools with a higher concentration of high-need students would receive additional funding while the majority of schools forgo it. Depending on the proposal’s exact implementation model, even very poor schools could lose money because they are not serving high concentrations of other needy student groups. The Department of Education predicts the change would cost between $60 million and $120 million.

In addition to per-student funding, each school receives $225,000, traditionally to pay for a principal and secretary. The report recommends increasing this amount to cover additional positions, as some campuses may struggle to pay for a full range of mental health and academic staff — especially those with fewer students.

These proposals are costly: between 160 and 526 million dollars. Without additional funding, the proposal would represent a significant transfer of resources from larger schools to smaller ones and would only modestly increase funding for poorer schools, according to the Department for Education’s analysis. The 10 largest schools in the city would lose an average of $712 per student.

Increasing funding for schools, regardless of the number of students enrolled, helps small schools, whose numbers have grown as enrollment has dropped dramatically. But it also raises questions about whether declining campuses should end up with significantly more funding per student even as their ability to offer a full range of programs diminishes.

“Increased investment in schools with fewer than 200 students can only prolong an inevitable decline in funding to levels that cannot support ever-smaller schools,” the report notes. “Since these schools largely serve students in need, it behooves New York public schools to find longer-term solutions to the growing number of small schools.”