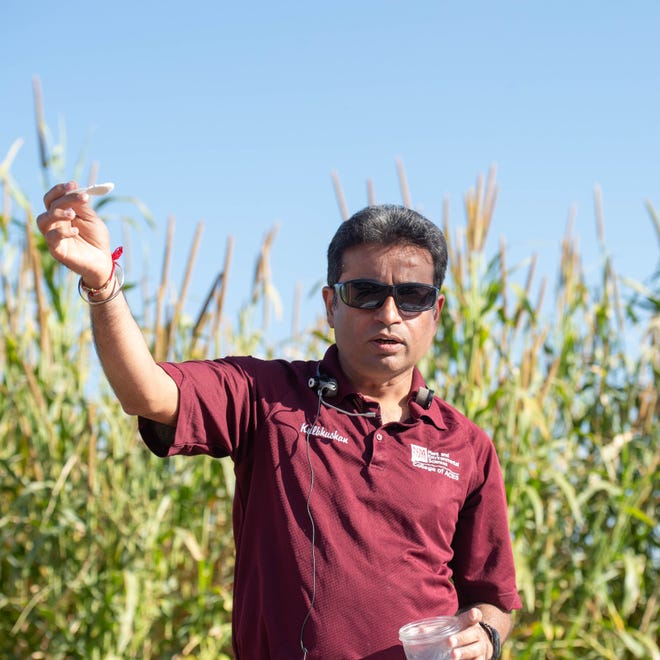 Grover, a research fellow at New Mexico State University’s College of Agricultural, Consumer, and Environmental Sciences, is from India, the world’s top producer of guar, a humble legume that grows in clusters and has many industrial uses.

“It’s one of the most drought-tolerant plants that we’re looking at as an alternative crop for areas like New Mexico due to water issues,” Grover said.

Grover, who specializes in sustainable agricultural production, initiated research efforts at NMSU to evaluate guar for its suitability in New Mexico.

Grover said the guar thrives in arid regions of the world. About 80% of the world’s guar supply comes from India, and the United States is one of the largest importers of guar.

Guar – meaning “cow food” in Hindi – is commonly used as high-protein fodder for livestock or eaten as a fresh vegetable, much like its closely related cousin, the green bean.

Guar gum – derived from the endosperm of guar seeds – is widely used as a stabilizing or emulsifying ingredient in many food and cosmetic products.

“Guar is very useful in many industries,” Grover said. “But if we focus on the oil industry – which is one of the biggest industries – we’re talking hundreds of millions of dollars in a guar product.”

Grover said demand for guar gum in the petroleum industry alone far exceeds supply. Currently, there is only one guar processor in the United States, he added.

“There is huge potential that we can exploit to cultivate guar domestically,” he said.

For this reason, Grover views guar as a lucrative crop for New Mexico growers.

He began researching the adaptability of guar several years ago, establishing research plots at the Fabián García Science Center and the Leyendecker Plant Science Research Center in Las Cruces.

Grover’s research results show that guar can be successfully adapted to grow in semi-arid desert regions like New Mexico due to its ability to tolerate heat and water stress.

“For many years I worked in one of the major guar producing regions in India,” he said. “When I came to the United States I saw that we spent a lot of money importing this stuff. That’s why I started this research because we have a similar climate here in New Mexico , which is ideal for growing guar.

Over the years, Grover has worked with a variety of collaborators to support his research, including faculty and students in the Department of Plant and Environmental Sciences. He has also collaborated on guar-related projects with the University of Arizona and Texas Tech University and has received grants from the National Institute of Food and Agriculture of the United States Department of Agriculture. to fund his research.

In addition to his research projects, Grover is a dedicated educator. He teaches popular courses in plant science and sustainable agricultural production, and his award-winning teaching approaches emphasize experiential learning and organic farming.

In 2021, Grover was NMSU’s Principal Investigator who was part of a team of collaborators from New Mexico, Texas, and Florida who received a $1 million grant to help train Hispanic students in conduct research in agricultural science.

“Teaching is my passion,” he said.

“Eye on Research” is provided by New Mexico State University. This week’s article was written by Carlos Andres López of Marketing and Communications. He can be reached at 575-646-1955 or [email protected]

Should I refinance my mortgage now?