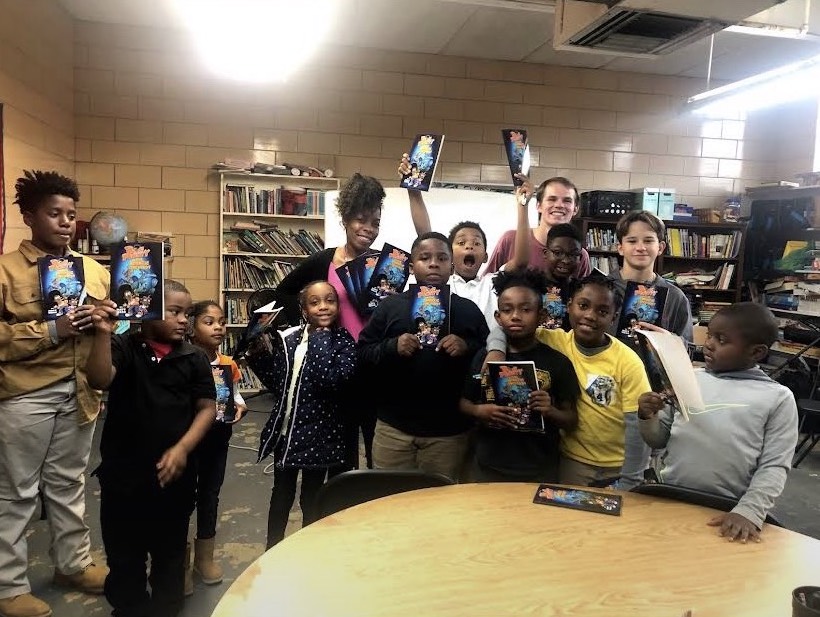 While hiking in Colorado’s Rocky Mountains National Park in 2016, Alison Buehler and Jo Winn, former roommates at the University of Southern Mississippi, started discussing what books their kids liked. When Winn, who is black, shared that “Diary of a Wimpy Kid” and “Captain Underpants” sparked her kids’ interest in reading, Buehler, who is white, asked, “But what characters do they like? who look like them?”

Winn had no answer. The two women immediately recognized a big problem: the lack of black characters in children’s books.

In 2018, the University of Wisconsin’s Cooperative Children’s Book Center found that only 10% of children’s books featured black characters – a lack of representation that contributes to the racial literacy gap. In 2019, only 18% of fourth-grade black students nationwide were considered “proficient in reading,” defined by the National Assessment of Educational Progress (NAEP) as “demonstrated proficiency in a difficult subject, including knowledge of the subject, the application of such knowledge to real-world situations and analytical skills appropriate to the subject. That compares to 45% of white fourth graders. NAEP data shows the number is even lower for fourth-grade black boys in Mississippi, at just 15 percent.

So Buehler and Winn, who are both writers, came up with a solution: write a fun book for young people featuring relatable black characters. Over several phone calls, Winn dictated a story as Buehler typed, creating Merlin Montgomery, aka “Big Monty”, a science-loving middle schooler, and his sister Josephine, whose adventures include saving their school from a monster made from the remains of the dining hall, a cyborg substitute teacher, and more. Several chapters end with easy-to-follow science lessons.

Matt Maxx Books was born. Told that there was a “lack of market” for Big Monty, Winn and Buehler turned to self-publishing.

“We knew we had a good story,” Buehler said.

They chose the pen name Matt Maxx after their sons and created a “Where are the books that look like me?” Kickstarter campaign. They organized the project as part of the Homestead Educational Center, a 501(c)(3) nonprofit charity run by Buehler that raises funds to “improve the health, home, and community of Mississippi.” The Kickstarter campaign raised $25,000 – enough to publish and distribute 1,000 copies of ‘Big Monty and the Lunatic Lunch Lady’ and launch the second book, ‘Big Monty and the Cyborg Substitute,’ which won a Mom’s Choice Awards. Both books were released in 2019.

The project then released “Big Monty and the Pumped Up Principal” in 2020 and “Big Monty and the Malicious Music Teacher” last March. The entire series has now sold and distributed over 15,000 copies, selling up to 900 books per month. School libraries have even reported waiting lists for students wishing to read Big Monty’s books.

So much for the “lack of market”.

Matt Maxx’s team has evolved since the release of the first book and now includes five people – writers, educators and artists. Vanessa Shaffer, an educator, homeless youth advocate, and tennis coach in Starkville, Mississippi, marketed and promoted the books from the start.

“I was on board when I learned it was about the black boy literacy gap,” says Shaffer, who is black. “My children’s doctors had stressed how important it was to read to them, so I started before they were born. I wanted to help – whatever was needed.”

Chris Miller, a Nashville-based artist who is also black, illustrated all four books. Matt Maxx’s original team contacted him in 2018 after seeing his works on Instagram. He provided draft artwork for the front page and was hired immediately.

“The first book in the series was a bit more difficult,” says Miller. “Once we figured out a system, I would get the script and a list of images they wanted on each page. Once I hit the basic markers, I could embellish.”

The current writer is Rudi Rudd, a Starkville-based educator with eight years of teaching experience in Memphis, where the books are set. “Because the target audience is second through sixth grade, it’s important that the books are linear,” says Rudd, who is black. “So I followed the same structure as the other books. For example, Big Monty shows up in each book so they don’t have to be read in order. Something new that we added in the fourth book is a change of perspective from Big Monty to his little sister.” Rudd also enlisted the help of a former colleague from Memphis with what she called “some of Memphis’ most inspired slang.”

Buehler, who helped pen the first book, is now focused on publishing through self-publishing platform IngramSpark and Amazon. While fundraising paid for the first book and the start of the second, sales at a local bookstore and online funded the rest of the series. Buehler says sales were highest in five cities: Atlanta, New York, Oakland, Chicago and Dallas.

Shaffer first promoted the books by speaking at schools and after-school programs like the JL King Center in Starkville, Mississippi, which focuses on educational and other programs for communities in need. Margaret Brown, the centre’s youth development co-ordinator, said young people love Big Monty’s books and she has seen them make a difference.

“It worked. It helped,” she said, noting increased interest in reading and better grades.

Miller and Rudd say it’s important to them that the Big Monty series goes beyond symbolic representation and features black children living happily ever after. “There are books with black children that are good books but often contain a lot of tragic events,” Rudd says. “It’s not like that all the time. The Big Monty show shows kids are kids.” She says it’s also important to her that non-black kids who read the book “see classmates who don’t look like them doing normal things.”

The books changed the lives of team members Matt Maxx. In the show’s success, Rudd and Miller see encouragement for black creatives — and the message that just because a major publisher isn’t interested doesn’t mean a concept isn’t good.