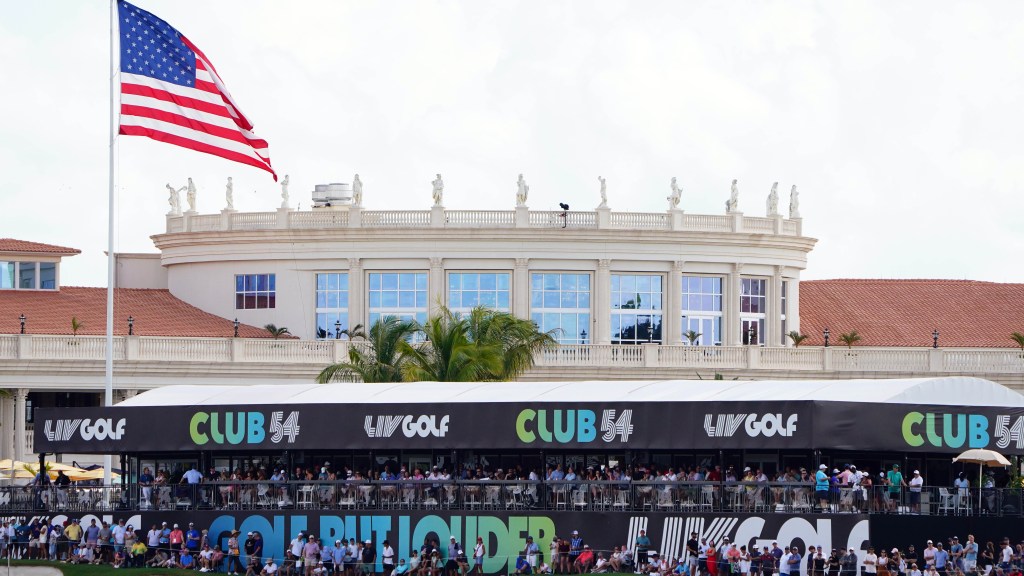 DORAL, Fla. — LIV Golf is banking on its team format.

Ahead of Saturday’s semi-finals at its $50 million tag team championship, LIV Golf officials met with some members of the media to outline its plans for the future. The main talking points centered around the 12 teams.

LIV says it is aiming for a business model that would eventually be similar to that of other major team sports in the United States, such as the NFL, NBA, MLB and NHL, and officials hope the franchise of its teams will create a revenue stream that the upstart circuit solely funded by Saudi Arabia’s Public Investment Fund does not currently have.

“Our belief is that it may not be the case from the start, but people understand team sports. They play team sports,” said LIV Golf COO, Atul Khosla: “Yes, they have a favorite player too, it’s no different than anywhere else, but it’s related to being associated with a team. We believe this trend may continue in golf as well.

“The concept that I understand is new to golf, but the inherent human nature of our aspect of wanting to associate with the team, it’s not.”

That said, if you can’t get behind Dustin Johnson’s 4Aces GC or Brooks Koepka’s Smash GC, LIV believes its individual elements of golfers playing their own ball, counting their own score, and winning individual prizes is enough.

Believe it or not, LIV wants to add to the professional golf scene and provide fans with a different form of entertainment. They certainly do the latter with no cuts, shotgun tee-off events that feature music throughout the tour and countless activities in its fan village in addition to on-course product.

Khosla said a successful 2023 — when the Tour transitions to the 14-event LIV Golf League — will see 12 established teams and brands, as well as one commercialized product.

“We have to get on TV, we have to have business partners,” he explained. “These are successful things that we need, they are sort of milestones that we have to achieve next year.”

Here are some other highlights from the presentation:

LIV confirmed at its event earlier this summer at Trump National Bedminster that it will transition to the LIV Golf League in 2023 with 48 players across 12 team franchises playing a 14-event schedule in a bid to expand the golf’s footprint across North and Latin America, Asia, Australia, the Middle East and Europe.

Of the eight events this season, five were held in the United States, one in England, one in Thailand and one in Saudi Arabia. Expect LIV to hit golf-starved markets again in 2023, similar to its 2022 schedule which included stops near Portland, Boston and Chicago, as well as the home countries of some of its players, which would indicate potential stops in Australia, South Africa and England. With its Saudi support, expect another stopover in the Kingdom as well.

When these events will be played is also TBD. LIV wants nothing to do with the competition against the NFL, which indicates a late February start and a late September start. The league will also avoid facing the majors and also does not plan to hold any events the week before. LIV also wants to avoid so-called “legacy events,” such as the Genesis Invitational and the Arnold Palmer Invitational, which creates a tight schedule, especially with international travel. The series has done well with producing a slow stream of news between events, pointing to a planned November release.

New players… and a transfer window?

Khosla did not provide details on the number of new players likely to join the league, opting instead to ‘let player negotiations take place’. The goal is for teams to be locked down by the end of this year. Each team will also have a designated replacement in 2023, but only for injuries.

The most unique change when the league format takes shape will be a quasi-transfer market where players can move between teams within a certain time after the Tag Team Championship and before the start of the following season. . With a long four-month hiatus between the one-season finale and the upcoming season opener, a handful of free agent trades and moves could make for an interesting offseason.

Players will compete for $405 million in total prize money in 2023 and have other opportunities to earn money and compete in the Asian Tour International Series, where LIV expects players to compete in of “many” events. After all, LIV and the PIF committed $300 million for the Asian tour.

The 12 franchise teams will be 75% owned by LIV, with the remaining 25% owned by core players, which would include captains such as Dustin Johnson, Bryson DeChambeau, Phil Mickelson, and more. These franchises will also incur new costs in the coming 2023. of their team’s budget, such as a player’s annual payment, incentives, and general expenses, including travel and hiring of team personnel.

All in all, big changes are in store for 2023 that could alter the future of the league.

Every mother is CFO, learned basic lessons from her : Bandhan Bank MD & CEO

IPO: four cos should be made public next week; seeks to raise more than Rs 4,500 cr