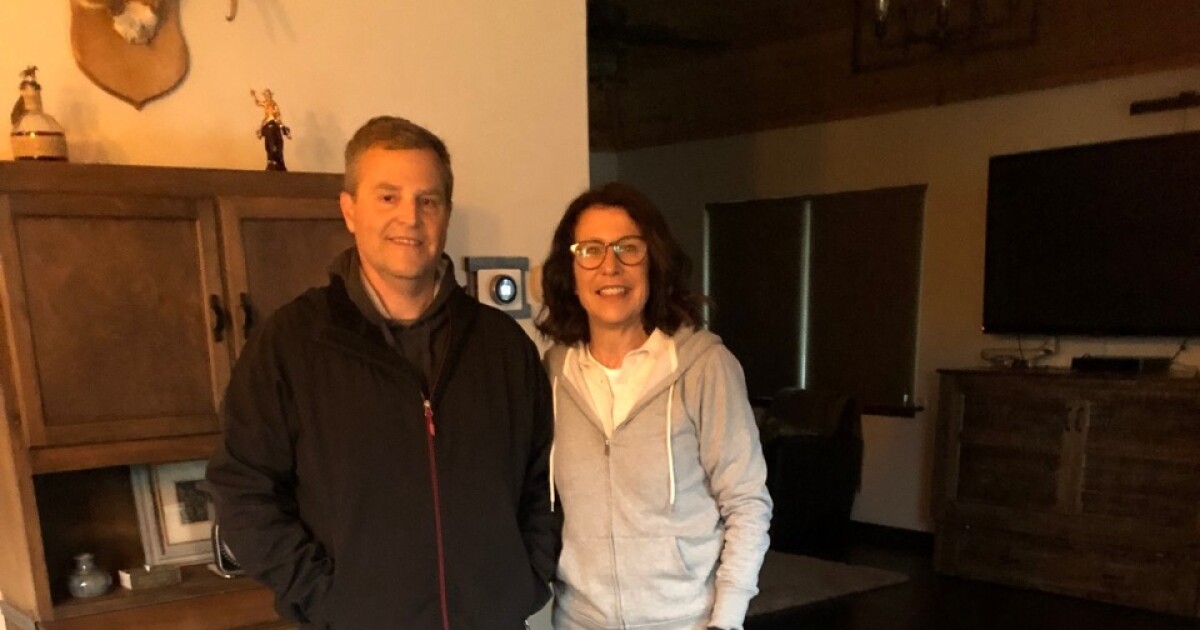 Diane Jones Haney and her husband, Bryan, were chatting in their Idaho kitchen when they heard the news of the Russian invasion of Ukraine.

The Newport Beach couple, who split their time between their homes in California and Hayden, Idaho, spoke about what they could do to help Ukraine’s 4.8 million refugees, according to the The United Nationswho fled the violence.

When Bryan mentioned that he wished he could travel to Europe to help out, Diane asked if he was serious.

“I thought the same,” Diane Jones Haney told The Daily Pilot this week in a message sent from Poland, where they are carrying out relief work. “He said, ‘Yes,’ he would do it in a heartbeat. So, I said, ‘OK, let’s do it.’

Haney said the best idea they had at the time was to book a flight to Amsterdam and work out from where their next steps should be. They had no concrete plan for how they would help the Ukrainian cause until a mutual friend put them in touch with Katarzyna Grabowiec, a Polish immigrant who lives in Irvine.

Grabowiec, in turn, put them in touch with a priest in Poland, Krzysztof Kauf, who was transporting food and clothing to Ukraine and bringing refugees back to the small Polish village of Bolesławów.

That’s when all the pieces started to fall into place.

The Haneys then traveled to Poland, where they were picked up at the airport by Kauf and taken to Bolesławów, where they stayed for just over a week.

“Even though we’re both retired, we tend to keep busy. We both always believed in helping others and had done a lot of volunteering for our kids’ football teams, helping out at their schools, etc. They’re all adults now and it’s been a while since we’ve volunteered one way or another. said Diane Haney, who added that she considers her mother a role model in the field of charity work.

“I like to think [my mother] helped ignite the spark in me and [to] go do something great for others in need,” Haney said. “Besides, we’re always up for adventure. We have traveled quite a bit in Western Europe, but never in Eastern Europe.

The couple said there has been no real schedule or flow to their days so far, although they have tried to help in their own way as Kauf prepares for Easter. They discovered that one of the refugees was a hairdresser, so the two paid the woman to cut her hair. When the refugees were making decorations to sell for Palm Sunday, Diane stepped in to help.

When they learned that some boys wanted soccer cleats and shin guards, they gave them youth soccer gear they had brought from the United States and bought other items for them in Poland. .

“So in the early days, we figured out how to help in small ways,” Haney said.

But some refugees are less easy to help. Although they’ve encountered a mix of introverts and extroverts, they haven’t encountered many who seem comfortable communicating with them.

The language barrier adds a layer of difficulty for villagers, Haneys and refugees. Few know English and the Haneys do not know their languages. Thus, they manage with Google Translate and navigate by hand gestures. Haney joked it can sometimes seem like they’re all playing a game of charades.

“But you can see and hear a series of difficulties that they have to face. A mother’s 9-month-old baby had bronchitis when they arrived at the border. She is grateful that a doctor was able to prescribe her medicine, but it must be difficult to care for a sick baby on your own,” Haney said.

Another woman’s son fled to Krakow, more than three hours by car from the village. He finally came back after three days.

“Does it occur to me that maybe we are crazy to be here in Poland? Yes, but I spend hours reading the news… between having a well-equipped army and being a NATO country, you feel safe [in Poland]“, said Hany.

She said they were now focusing on fundraising to renovate a house owned by a local Polish couple that could house up to 50 refugees, if not more. For this effort, the Haneys’ daughter, Cori, who is still in the United States, has set up a GoFundMe Account. By Friday morning, they had raised $4,600 of their $10,000 goal.

The couple who own the property previously operated a souvenir stand that was hit hard by the pandemic, Haney said. They were determined to make the renovations by next week, ahead of the upcoming tourist season which they fear will push refugees out of the short-term rentals they are currently staying in.

Haney said she and her husband hope to stay next week to help set up all the beds and see the final results of the home’s renovation. Once back in the United States, she also intends to continue fundraising and helping refugees.

“[Kauf] let us know if there are any supplies we can send or items that need to be purchased. We became friends with several of the mothers and their children. We wouldn’t hesitate if we knew we were going to help them,” Haney said.

According to the United Nations, around 2.7 million Ukrainians have resettled in Poland, although Monette Zard, associate professor of forced migration and health at Columbia University in New York, noted in a recent article published by the university that European countries have largely waived their admission requirements.

The United Nations reports that thousands more have fled to Romania, Hungary, Slovakia, Belarus, the Republic of Moldova and the Russian Federation.

The peak of the exodus so far appears to have occurred in March, although Zard notes in the publication that the United Nations estimates that at least 4 million people are expected to flee.

Grabowiec said she believed the Haneys’ mission and hers were all “part of God’s plan.”

Grabowiec has been in contact with Kauf for a few years now and was donating to him even before the Russian invasion of Ukraine. She said she would rather donate directly to the cause than through charities which she said would always take a percentage of what she donated.

“I am very happy that [the Haneys] went there, really.

Support our coverage by becoming a digital subscriber.

Are you ready to buy a house? This is what Suze Orman says