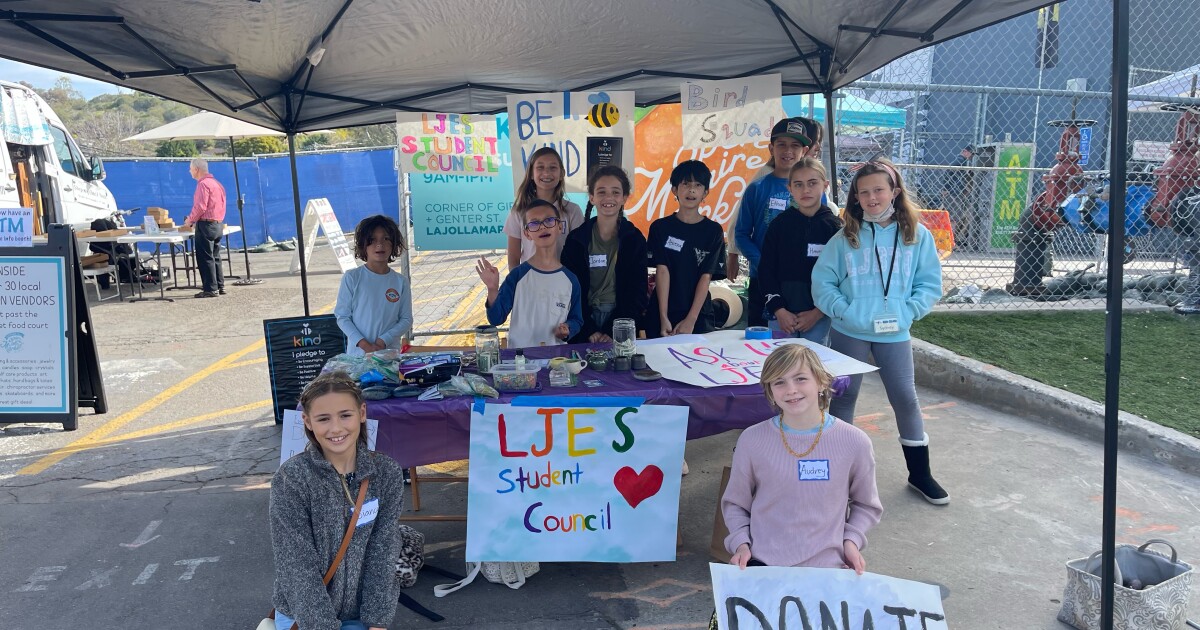 Monique Konovalov, co-advisor of the LJES student council, of which her fifth-year student is a member, said the group of 13 students had begun implementing activities from The Be Kind People Project, a nonprofit organization based in Arizona that provides schools and communities with ideas for community engagement, classroom lessons and more.

Shortly after deciding to take on the Be Kind People project, the LJES student council thought about broadening the impact by inviting Bird Rock and Torrey Pines Elementary Schools to join us, Konovalov said.

She said BRES immediately jumped on board with its Bird Squad, a group of students who take on leadership roles at school.

Konovalov said that TPES “is also interested [but] needed more time” to get organized.

BRES director Andi Frost said the 20 members of Bird Squad joined the Be Kind project because “we want to be part of our wider community and really be a positive change”.

At BRES, Frost said, “we promote kindness. We discuss ways to be kind and that kindness isn’t just a word, [it’s] an action. How can we all be kinder and more loving and considerate and accept each other? »

Konovalov said the students involved made a kindness pledge that contains 10 promises, such as “to be encouraging, supportive, positive, helpful, honest, caring.” [and] respectful.”

Students are asking classes at their schools to make the pledge.

They also hosted a booth at the La Jolla Open Aire Market on Feb. 27 to raise funds for the project, said fifth-grade student and LJES student council president Jordan Erwteman.

Jordan said those working at the booth raised awareness of the Be Kind People project’s goal to “get one million people to sign the pledge…to spread kindness in the community.”

She said local members visit shops in The Village and Bird Rock to ask shopkeepers to hang a poster about the project in their windows.

When the kids started fundraising, they “didn’t know exactly how we were going to implement kindness in the community,” Konovalov said.

But on March 2, “we had a meeting and the kids were really passionate about using the money for humanitarian aid to Ukraine,” she said. Some students were already beginning to research organizations to donate to.

“They are quite enthusiastic, motivated to do whatever is useful,” Konovalov said.

Jordan said the project’s efforts are important because “we want the community to be at peace and we want everyone to be kind so that it’s a better world.”

The kids will be doing a beach cleanup later in March, she said.

“We will also document any kindness stories we come across in our efforts and tag them on social media,” Konovalov said.

She said the group had requested a proclamation from San Diego Mayor Todd Gloria designating La Jolla as a “community of kindness” and was waiting to hear from his office.

Meanwhile, Konovalov said Gloria’s office “gave us certificates of recognition for our work.”

“We want the community to be at peace and we want everyone to be kind so that it’s a better world.”

Frost said she hopes the students’ efforts will have a greater impact on La Jolla. “I’m a big believer in incrementalism … ‘Let it start with me first,'” she said.

Bird Squad advisor Deanna Lack said raising awareness of the Be Kind People project will encourage others to participate in “small ways, which eventually come together to make bigger and bigger change.”

“Just creating that conversation is beneficial to making something more widespread,” she said.

“I just think it’s really great that they’re taking on this project and trying to initiate this positive social change in the community,” Konovalov said. “We will continue to do the work.” ◆