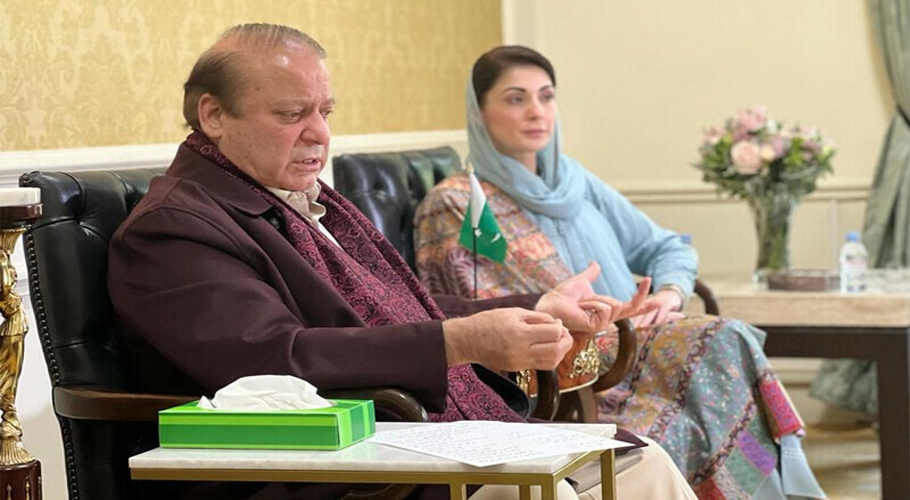 Judges should be held accountable for injustices: Nawaz Sharif

LONDON: Former three-time prime minister and Pakistan Muslim League-Nawaz (PML-N) supremo Nawaz Sharif said on Sunday the country had been dragged into a quagmire after taking revenge on him and demanded that judges be accountable and held accountable. for the “injustices” they inflicted on his family.

During a press conference, described as “heart to heart”, the former Prime Minister said: “For four or five years, everything has been reversed. The world is watching and so are we.

“False cases, injustice and oppression take place. Judges, who have inflicted injustices, will be embarrassed when they reflect on themselves,” said Nawaz – who was flanked by PML-N Vice President Maryam Nawaz.

Lambasting PTI chairman Imran Khan, Nawaz claimed that during the former prime minister’s tenure he had seen “acts that had never been done before”.

Nawaz said the deeds of the “tyrants” are gradually coming to light and in the coming days more facts about them will come to light. “Everything they have done is exposed before the nation.”

“He turned everything around. He claimed that he would rather die by suicide than make a deal with the IMF. The nation is still waiting for him to kill himself [as per his claims],” he said.

Nawaz then referred to the alleged audio clip of former Chief Justice Saqib Nisar, in which he can allegedly be heard telling another person that the PML-N supremo and Maryam should be punished to make room for Khan in Politics.

“What other proof do you want […] we have faced injustice many times, but no judge took notice suo motu, Judge Arshad Malik accepted that he was pressured to convict me,” he said.

Nawaz claimed that during his tenure, Pakistan was becoming a strong economy as terrorism was almost eliminated and the country’s financial situation was also strengthening.

“I thought Pakistan would become a strong nation. They [PTI] pretend to adhere to the policy of “absolutely not”, but hey, they did nothing. I was the one who said ‘absolutely not’ when I was handed $5 billion on a platter,” he said.

Although the PML-N government has completed its IMF program, the Imran Khan-led regime has forced Pakistan to return to the money lender and beg for loans.

“Everything – from daily use items to luxuries – has become expensive. We had completed the load shedding, but Imran restarted it. Imran has also soured Pakistan’s relations with other countries,” Nawaz said.

Nawaz said his services were “matchless”, but Khan came to power and “destroyed everything”.

“This is nothing but revenge. If you wanted revenge, you could have taken it from me, but you have put the future of Pakistan at risk,” the PML-N leader added.

The PML-N supremo said that despite his wife’s deteriorating health, the National Accountability Bureau (NAB) judge announced his verdict – sentencing him to 10 years in prison, while Maryam received seven years.

Nawaz said he was convicted in a case in 2018 and the motive was to foil PML-N’s bid to return to power as the verdict came just as the general election approached.

“When I was sent to prison, Maryam often came to visit me. During one such visit, we were informed that NAB staff were outside Kot Lakhpat prison and wanted to arrest Maryam,” he said.

“They then arrested Maryam in front of me and her younger daughter. This arrest was made to hurt me. There was no other reason for it. They must have planned to arrest Maryam right in front of her father,” Nawaz said.

Nawaz claimed he had never seen anyone arrested like this before. He asked who will be held accountable for these actions of government officials.

The PML-N supremo once said when presented in court by Judge Arshad Malik that he was told that his wife’s health – that of Kulsoom Nawaz – was deteriorating again.

“I approached the director of the prison and begged him to allow me to speak to my wife. After that they took me to my cell and three hours later they came to see me and informed me that my wife had died,” he said.

“Can you imagine what I had to go through? The same people who refused me to speak to my wife informed me of her death. However, I forbade them to inform Maryam and asked them to allow me to inform her,” he said.

“Maryam had no idea so when I told her about it she went into a state of shock and started crying uncontrollably,” he said, adding that he had a lot struggling to comfort his daughter. He said he and Maryam must have learned of Kulsoom’s death while in prison.

Nawaz said the loss of his wife was irreparable, adding that people should not subject anyone to harsh treatment when it comes to politics.

Do you want to read authentic news from Pakistan and around the world? So download the MM News app now!

Frequent travelers are a climate problem. Should they pay more?