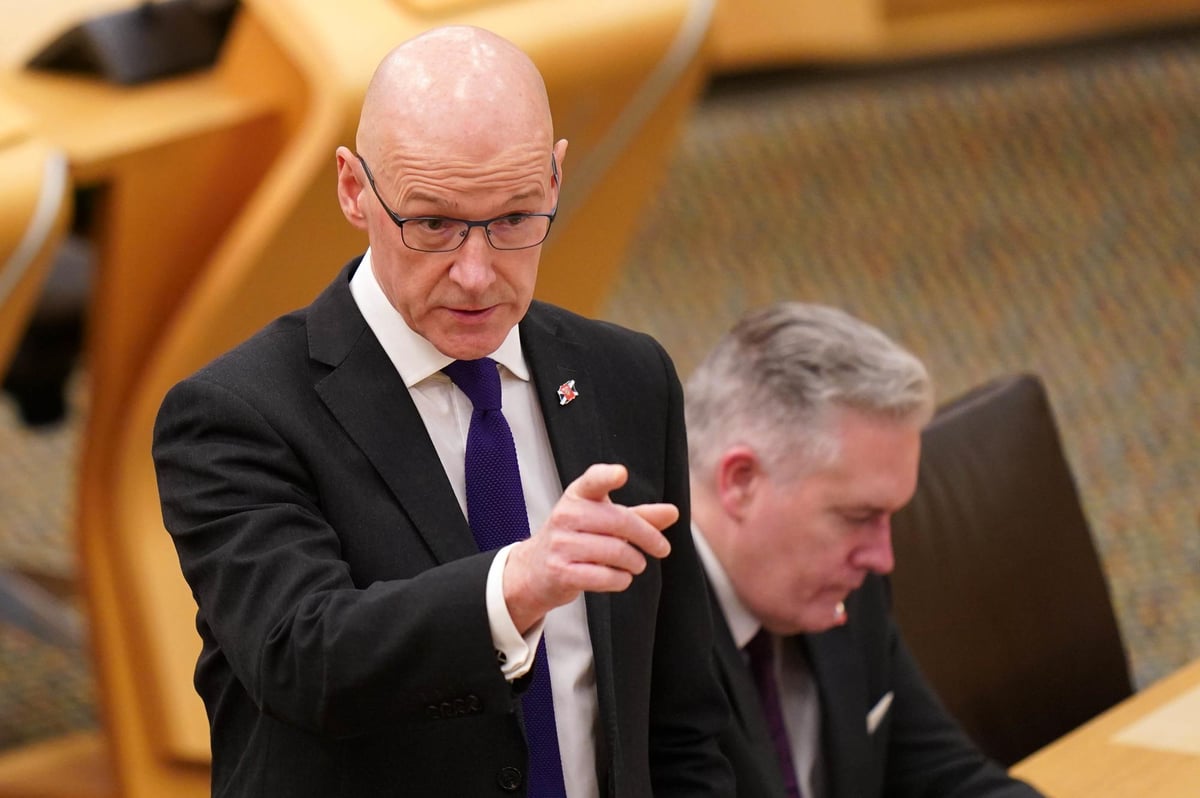 Health budget cuts worth £400m come ahead of a hugely difficult winter for the NHS, which continues to come under pressure under the strain of the pandemic, faces threats of a widespread strike among health service workers and displayed record performance in accident and emergency services.

Presenting the outcome of the long-awaited emergency budget review, John Swinney announced a further cut of £615m on top of the £560m announced in September. The in-year budget review was due to take place within two weeks of the ‘mini-budget’ in Westminster, which ultimately cost Liz Truss his job as Prime Minister, but was twice delayed until Wednesday . The statement from the finance secretary, who replaces Kate Forbes during her maternity leave, means that £1.2billion has been cut from the Scottish budget in two months.

The Deputy Prime Minister blamed the UK government’s “serious financial mismanagement” for the cuts, saying “calamity is giving way to austerity” ahead of the UK government’s autumn statement on November 17. He also pointed to the “extraordinary pressures of inflation” which he said had forced the government’s hand.

Mr Swinney told MSPs: ‘I have to balance the books, but I am committed to doing so in a way that prioritizes funding to help families, support businesses, provide fair wage rewards and protect the delivery of public services. These are not decisions we would like to make, but in the absence of additional funding from the UK government, these are decisions we are forced to make. They secure a path to a balanced budget, while prioritizing fair wage offers in the public sector and recognizing that this is essential for the delivery of key public services. »

The Deputy First Minister also confirmed that further cuts to the budget during the year may be needed if the UK Government’s Autumn Statement leads to a reduction in overall funding for Scottish Government grants due to spending cuts to the Westminster level. A year-end budget process called Supplementary Estimates could also result in additional costs or extra funding for the Scottish Treasury.

The £400m health budget reprioritization includes £116m in cuts to Covid-19 spending on vaccination, test and protect and PPE, plus £70m from social care and the development of the much-criticized National Care Service plans. An additional £65million was taken from primary care services, including delays to community optometry and audiology services, with a further cut of £63million from the Scottish Trauma Network and health programs improvement.

Scottish Labor health spokeswoman Jackie Baillie called the cuts “downright dangerous” for a health service “on the brink of disaster”. She said: “A deadly winter crisis is looming and the looting of frontline essential service budgets will cost lives. The SNP says it’s about ‘reprioritising’ budgets to pay NHS staff, but the pay is recurring year after year so these are clearly cuts. NHS staff and patients cannot be made to pay the price for the economic vandalism of the SNP and the Tories. The SNP must rethink these reckless plans.

The Scottish Liberal Democrats have also highlighted the £38million cut to mental health services, with party leader Alex Cole-Hamilton calling the move “demonstrably wrong”. Mr Swinney said resources within mental health would no longer be growing as “rapidly as we had anticipated”, but would continue to grow.

Liz Smith, the finance spokeswoman for the Scottish Conservatives, tried to deflect blame from the UK government. She called on the Scottish Government to support “the priorities of Scottish households rather than our own pet projects”. The MSP also called on the government to abandon plans for a national care service because of the financial implications and to look to the constitutional budget for further savings.

She said: “The current difficult circumstances do not absolve the Deputy First Minister or his colleagues of responsibility for the position Scotland finds itself in after 15 years of government.

“These drastic cuts to SNP spending on NHS frontline services will only put the lives of more patients on the line. Our health service is already on its knees and heroic patients and staff face the prospect of a truly catastrophic winter.

Other areas affected by the spending cuts include £30m of capital spending on higher education construction projects, £10m related to the rollout of digital devices in school and £16m sterling around the R100 ultra-fast broadband scheme. A total of £28.5m was cut from support for active travel projects and the Future Transport Fund, with just over £7m cut from road projects.

However, the savings will also fund doubling the value of Scotland’s December Bridging Payment for Children to £260m, increase council funding for additional discretionary housing payment support and provide a £1 emergency fund. £.4 million for the Island Cost Crisis to support those on islands facing even greater cost of living challenges.

The full Scottish budget, which will set out the budget scenario for next year, will be presented on December 15, including any planned tax hikes. Mr Swinney gave an idea of ​​the scale of the challenge, saying the reserves earmarked for next year’s budget had yet to be found in this year’s budget. This suggests that the finalized budget will be well below the already difficult projections of May’s Resource Spending Review, which predicted cuts in real terms across the majority of portfolios, including local government and justice. Such a situation could see even bigger cuts announced alongside tax hikes for Scots just before Christmas.

Mairi Spowage, director of the Fraser of Allander Institute, said the rigidity of the Scottish government’s budget meant a “strong argument” could be made for strengthening taxing powers. She said: “The lack of real capacity on the part of the Scottish Government to be able to adjust its budget within the year in response to unforeseen shocks remains a real limitation of the existing budget rulebook. As we noted in a report last year, in collaboration with IFS [Institute for Fiscal Studies] and the University of Stirling, strong arguments can be made to strengthen the ability of the Scottish Government to borrow and/or draw resources from its reserve.

“Such tax flexibilities would provide the Scottish Government with additional policy levers to deal with unprecedented circumstances.”

Philip Whyte, director of the Institute for Public Policy Research Scotland, said the UK government’s actions “cannot absolve the Scottish government of responsibility” despite the powers held in Downing Street. He said: “While this process has to some extent revealed the limitations of the current decentralization regulations, we cannot allow this to become an annual excuse for in-year cuts.

“Tackling child poverty, strong public services, a better and more inclusive economy and a sustainable future remain the priorities of the people of Scotland – they must be delivered. In the long term, the Scottish Government must think bigger – by looking at income tax, and wealth taxes and a replacement for regressive council tax – and using its existing powers more progressively to secure sustainable incomes to fund Scotland’s collective priorities .

Want to know more about The Scotsman’s political team? Check out the latest episode of our political podcast, The Steamie.