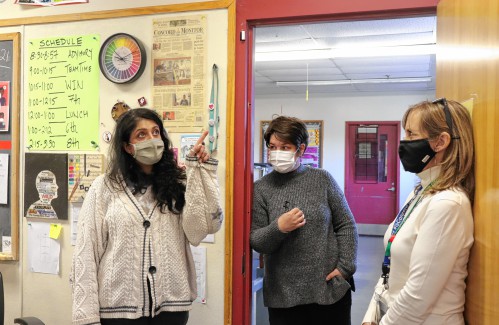 â€œOne (socket) has a SMART Board, one has the glue gun, one has music, and the other has my computer,â€ Bednaz said. â€œSo when a kid comes in and they need something, or if I need to make a glue gun station, it’s awkward. ”

The lack of outlets in the Rundlett Middle School building circa 1957 is just one of many challenges teachers faced throughout the year at a time when the district was thinking exactly about what it would look like and how it would work. of a new middle school.

Bednaz and her fellow art teachers, Kristine Nyhan and Somayeh Kashi, illustrated the problems of the aging building during a tour last week. For them, it goes beyond a simple inconvenience. The configuration of the school often limits what they teach and how they do their job. Because the electrical system can only handle one kiln, teachers often come at night and on weekends to load and unload dozens of student pottery projects, each of which must be fired twice, to be seated. ensure they are completed on time.

Kashi’s classroom is L-shaped, which means that when working with students in one half of the room, she cannot see what the students are doing in the corner near the sink – something something she sees as a security issue. Kashi jokingly bought a circular aisle mirror to combat the problem, but hasn’t installed it yet.

â€œIt’s definitely something we have to consider when we are running a project. We have to take these limits into account, â€Kashi said. â€œAnd I wish it wasn’t there. There are limitations that prevent us from sometimes developing projects. ”

The Concord School District is moving forward with plans to construct a new Rundlett Middle School building to replace the current one, which was originally built to be a junior high school. Rundlett’s current building has issues ranging from a crumbling exterior, to an outdated cooling and ventilation system, to a leaky roof. On rainy days, it is not uncommon to see buckets in the hallways, collecting the drops.

â€œ(Director of Facilities and Planning) Matt Cashman did an amazing job trying to put bandages and duct tape on this old building,â€ said Paulette Fitzgerald, principal of Rundlett Middle School. “But you reach a point where the amount of money we would have to invest in this building would be huge, and we still don’t have the provision for the proper programming.”

But beyond the maintenance issues, many employees say the building does not meet the school’s current teaching and learning needs. For teachers at Rundlett, the prospect of acquiring a new school building carries with it the promise of being able to teach more flexibly, supervise students more easily, and have more space to store classroom materials. For some, a new building could open up a whole new range of projects and possible lessons.

â€œWe sort of manage. That’s what we’re used to, â€Fitzgerald said. â€œBut when I think about a new facility and how much we could improve programming and teaching for kids, I don’t want to sound dramatic, but it could be life changing from an education standpoint. ”

In the art department, Kashi, Bednaz, and Nyhan do hands-on projects with the middle school students, who they say are hungry for tactile activities after a year of distance and hybrid learning. But their classrooms don’t have the proper ventilation needed for some of the messiest materials.

â€œWe’re not the kind of teachers who do clean art,â€ Kashi said. â€œWe go in there, we make plaster and clay. We really want children to get their hands dirty. But it also creates its own challenges, and our classrooms don’t really rise to that challenge.

There is also very little storage space in their bedrooms for student materials and projects – a common closet, a drying rack that only fits in Bednaz’s room, and low shelves and stacked plastic bins. along the walls, filled with projects and supplies.

â€œHaving so many children, we cannot work hard,â€ Nyhan said. â€œI cannot store large projects. It should be flat or small. I would love for the kids to work on a larger scale, but we just don’t have the space to do it.

Down the hall, tech education teacher Jan Roberts is also struggling to find adequate storage for lumber projects. In the new school building, Roberts would like to see a technical space with an adjoining computer lab, with glass windows allowing easy supervision of children in the lab and in the workshop simultaneously.

â€œKids tend to be very fluid, they work back and forth, sometimes on computer stuff, sometimes on the project,â€ Roberts said. â€œOur computer lab is down the hall, which makes it a bit difficult if you have to bring in all the supplies for the kids who are still working on a project while someone else is switching to the computer. ”

Rundlett follows a common college model that divides the student body into smaller groups called “groups,” with three groups per grade level and four core content teachers assigned to each group. The purpose of clusters, according to Fitzgerald, is to make a large school feel smaller and to give students a chance to develop strong relationships with peers and the trusted adults around them during a period of development. where stability and connection are essential.

But the school building was not designed for the cluster model, which makes it difficult for the technique to work perfectly. Sixth grade students must walk through the building from their main cluster to take science lessons on a different floor, as there is no functioning science room in each cluster. Teachers usually walk them through school to science class, Fitzgerald says, due to the potential safety risk of college kids doing this hike unsupervised.

Fitzgerald is also concerned about the safety of the building’s long hallways, particularly the one dubbed the “Rundlett Mile,” which has few adjacent classrooms in which students could quickly find themselves to safety if the school were to be closed for a while. a period of transition. She also sees potential security risks with the main entrance hallway, in which people ringing the front doorbell are not immediately visible from the main office.

In her grade eight English class, teacher Linda O’Rourke found a solution to the plug problem by bringing a presentation cart on wheels that plugs into the wall and has multiple outlets for electronic devices.

But the biggest challenge for her is the small room that doesn’t leave much space for activities or flexible seating, and the temperature, which has reached 92 degrees during the summer months. Since the onset of COVID-19, a window air conditioning unit has been installed in O’Rourke’s classroom, as the addition of masks makes the heat even more unbearable.

â€œI had to bring a change of clothes because I sweat and change in the afternoon,â€ O’Rourke said. â€œThey can’t learn in this. And it is neither healthy nor safe for them.

In the science wing, the labs had plumbing problems. The gas, which teachers use for some fire experiments, sometimes doesn’t come out when it should and sometimes it comes out when it shouldn’t. Eighth-grade science teacher Michelle Ruopp said she looks forward to having updated facilities with a lab separate from the classroom seating area so she can try out different flexible seating arrangements.

â€œObviously I’m just updating the basics, but I’m also really looking forward to some modern ideas,â€ Ruopp said. “All of the research leads us to set up a classroom a certain way, and it’s not like that.”

Fitzgerald also dreams of having a room large enough to accommodate the entire student body, in order to have full school assemblies. Currently, Rundlett’s cafeteria and gymnasium are each large enough to hold one class at a time, and before current COVID-19 protocols discourage large group gatherings, administrators would hold three different assemblies for each grade level.

â€œIf it’s Spirit Week, you want to have some sort of school-wide climactic activity to really get that school spirit,â€ Fitzgerald said. â€œIt’s so important to fostering a sense of belonging in kids, that they’re a part of something bigger, and when you can’t do it, it’s a little difficult. ”

Before plans for the new building can begin, the district still has several decisions to make, including the location of the new school, whether the building will be a partnership with the YMCA of Concord, and whether the school will include grades 6 through 8 or five to eight.

Fitzgerald hopes a new building will help streamline the teaching and learning process and create a better environment for students in the future.

â€œEven though it’s subliminal, they’re sort of planning their future,â€ Fitzgerald said. â€œThe more we can help them to successfully engage in their learning, the better their future will be.