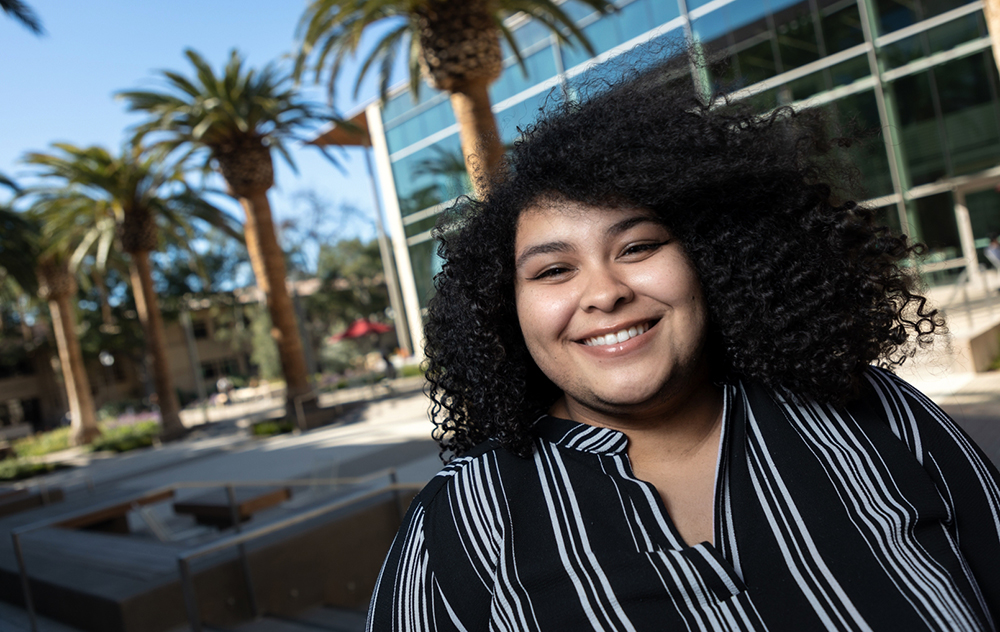 Thanks to a $9 million donation from the Sobrato family to fund scholarships, more students at Cristo Rey Jesuit High School will have the opportunity to fulfill their dream of going to Santa Clara.

Thanks to a $9 million donation from the Sobrato family to fund scholarships, more students at Cristo Rey Jesuit High School will have the opportunity to fulfill their dream of going to Santa Clara.

Rachel Station ’24 is in full swing at Santa Clara University. A sophomore with a double major in political science and women’s and gender studies, Station is passionate about law, social justice and policy advocacy.

She found a tight-knit community in SCU’s Multicultural Center and LEAD Scholars program, which supports first-generation students. Station sees the University’s Jesuit values ​​manifest all around her – in her friendships, in the classroom, and through the work she has done with student organizations. After graduation, she wants to help people in need, by pursuing a master’s degree in women’s and gender studies, East Asian studies, or international relations.

But the living station built at SCU almost didn’t happen. Like many students at Cristo Rey San José Jesuit High School, Station had the grades to attend a prestigious four-year college, but she didn’t have the money. His only option for furthering his education after graduation was to enroll in a two-year college.

Fortunately, she was offered the support of the Santa Clara Milligan Family Scholarship for Cristo Rey students. Not only did this make college possible, but it allowed her to choose a major without worrying about taking on loans and debt. “I’m very grateful for that, because it really helped me figure out what really excites me,” Station says. “Because of that, I feel really fulfilled.”

Now, thanks to a life-changing gift from John A. Sobrato ’60 and his family, many other Cristo Rey graduates like Station will have the opportunity to build their own lives in Santa Clara. The Cristo Rey and SCU administrator and his family have committed $9 million to create the Sobrato Family Scholarship Endowment, supporting four-year scholarships for Cristo Rey students in the area from the bay to attend SCU.

“We have long held that education is the gateway to opportunity and we hope this gift will make a great education accessible to more talented young people ready to contribute to society in their unique and meaningful ways,” says Sobrato. .

The donation will support students at Cristo Rey Jesuit High School San José, Cristo Rey De La Salle High School East Bay in Oakland and ICA Cristo Rey Academy in San Francisco. The schools are part of a nationwide Cristo Rey network that integrates college-preparatory scholars with work experience through a company-based work-study program. The network aims to empower first-generation students from families of limited economic means, with the Jesuit mission at its heart. If there are no incoming students from these schools, the scholarship endowment will help other first-generation students across the Bay Area.

“Students may have worked very hard in high school and it opens up a lot of opportunities for them,” says Uribe. “But then they see that some colleges cost around $75,000 a year. In some cases, it’s more than their parents earn in a year. At this point, college just isn’t a realistic option.

The Sobratos donation will serve as a vital lifeline for these students, who may not be able to afford tuition at a private university, while freeing them from debt upon graduation. SCU has already accepted 21 Cristo Rey San Jose students for early admission who are eligible for the scholarship if they commit to Santa Clara in the fall of 2022, according to school administrators.

“When we talk to our students about which schools they are applying to and which schools they want to go to, the most important thing is often whether they can afford it?” says Adolfo Guevara, acting director of Cristo Rey San José. “They have to think about housing, books, etc. I think what is special about this gift is that they have the opportunity not only to think about the financial aspect and the financial envelope that they will receive, but also to be connected to a school which reminds them so much of our school because of the Jesuit Connection.

This connection will give students a sense of belonging on campus — a vital element for first-generation students that often determines their success in college, Guevara says.

“That feeling of being at home and still having that connection with Cristo Rey and with the people who are part of their team is what makes this gift so special. It gives children the opportunity to go somewhere they will know they will be taken care of, where they will be loved and reminded to take care of themselves,” Guevara says.

This pipeline from Cristo Rey to Santa Clara will help the university cultivate a diverse student body that better reflects our society, says Eva Blanco Masias MA ’11, vice-president in charge of registration management. An estimated 92% of Cristo Rey San Jose’s approximately 480 students in 2020-21 were Latinx, meaning they come from a variety of Latin American cultures or ethnic identities, with experiences, backgrounds and various beliefs. Ninety-one percent will be the first members of their family to go to college and 75% will be eligible for a free or discounted lunch at Cristo Rey.

“For universities and institutions, especially one like ours that has a very particular service mission, it is important that we are a microcosm of the larger world,” says Blanco Masias. “When we bring together students who have so many rich experiences and see things from different perspectives, students leave SCU with a better understanding of others.”

Jim Lyonsvice president of academic relations, says he hopes the donation plants new seeds of philanthropy across SCU and beyond.

“At Santa Clara, we pride ourselves on giving back to our community in meaningful and lasting ways,” Lyons says. “We hope Sobratos’ donation will inspire others to join our mission so that students from all walks of life have the opportunity to receive an education immersed in the Jesuit tradition.”

Asked about his hopes for his students after graduation, Guevara de Cristo Rey San José stopped several times to hold back tears.

“My hope is that when and if they choose Santa Clara, they know they belong,” Guevara says. “It’s so important that they know that no one is giving them charity. That they are there because they truly belong and deserve it.

GFG routed the transactions through the Romanian bank of Sanjeev Gupta

MACCH is working to distribute $50 million in rental assistance