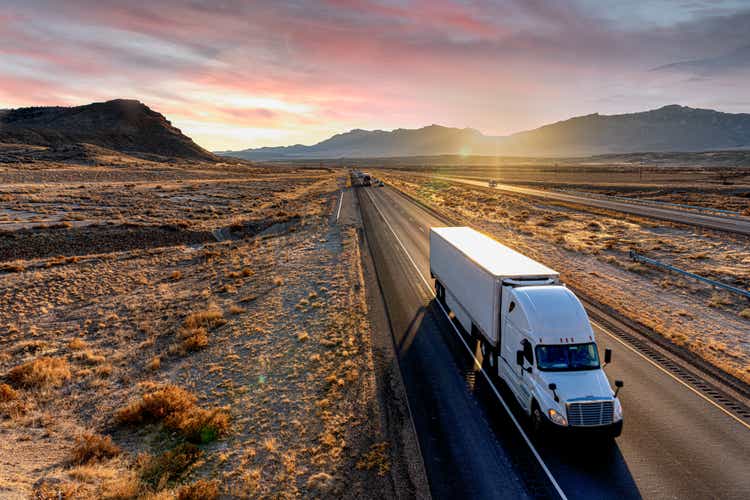 Daseke, Inc. (NASDAQ: DSKE) offers a diversified customer base, growing EBITDA, stable FCF margins and a favorable 2022 outlook. The company also stores fuel to reduce the effects of fuel costs, and drivers purchase gasoline from truck stops, where the company has negotiated prices. In my opinion, the current undervaluation is not justified at all. In the last presentation, management claimed to be trading at 5.18x while peers were trading at 7.7x. Furthermore, according to my DCF models, future free cash flows would justify significant upside potential in DSKE’s stock price. In my opinion, the DSKE is a buy.

Daseke is a transport solutions specialist offering tractors and flatbeds, storage services and trailers to customers in the United States, Canada and Mexico.

In my opinion, the most interesting feature of DSKE is the diversification of customers. The client list is long and I don’t see a significant concentration of clients. Customers also work for very different sectors including construction, metals, renewable energy and manufacturing, among others:

In addition, two aspects caught my attention, the positive prospects of the company and the fact that the management claims that DSKE is undervalued compared to its peers. Management expects to deliver 4% to 7% sales growth in 2022, 5% to 10% Adjusted EBITDA growth through increased industrial demand and operational initiatives:

In the most recent presentation, management claimed that the peer group is trading at 7.7x, making DSKE quite undervalued at 5.18x forward EBITDA. With cash of $147 million, net debt of $447 million, growing sales and growing EBITDA margins, I don’t really see why the company is trading at the current valuation. With that in mind, I decided to run a few DCF models:

My DCF model, assuming a conservative sales growth of 4% and an EBITDA margin of 14%, implies a share price of $19

In my opinion, if DSKE stores fuel in underground storage tanks, the company may not have to pay much for gasoline in the future. In addition, drivers reduce their fuel costs by visiting truck stops, where the company has negotiated prices. I’m not really inventing anything new that the company hasn’t done in the past. In this regard, read the following words from the leadership:

The Company purchases its fuel through a network of retail truck stops with which it has negotiated purchase volume discounts. The Company seeks to reduce its fuel costs by routing its drivers to truck stops with which the Company has negotiated volume discounts when fuel prices at such stops are lower than the wholesale rate paid for fuel at Company terminals. . The Company stores fuel in aboveground and underground storage tanks at some of its facilities. Source: 10-K

In my view, management will likely increase more than expected through M&A activity. As a result, I expect an increase in the EBITDA margin thanks to operational synergies. In my opinion, a large company will probably be able to negotiate with the bankers and receive more debt financing. With all of this in mind, let’s recall that management has established that the acquisition is part of the company’s strategic objectives:

As part of its business strategy, the Company has in the past and may in the future acquire strategic and complementary businesses. Source: 10-K

Acquiring businesses in the open bridge industry or other logistics sectors may also not be very difficult as the industry is quite fragmented. I’m sure there are plenty of competitors for sale:

The open deck industry is highly competitive and fragmented. The Company mainly competes with other flatbed carriers and, to a lesser extent, with logistics companies, as well as with railways. Source: 10-K

As part of the Company’s business strategy, it assesses the potential disposal of assets and businesses that may no longer help it achieve its objectives. Source: 10-K

Finally, assuming conservative D&A, changes in working capital, and effective tax of 22%, free cash flow is projected to increase from $58 million in 2022 to $161 million in 2032:

Downside risks: competition, lack of many long-term contracts and failed acquisitions or divestitures

Management notes that DSKE faces significant competition. Some open deck carriers have more resources, better equipment and less debt than DSKE. If customers decide to work with DSKE’s competitors, the company may lose market share. As a result, investors would expect less future free cash flow, and the company’s valuation will likely decline:

The Company competes with many open deck carriers of varying sizes, some of which may have better access to equipment, a wider range of services, greater capital resources, less debt or others competitive advantages and including smaller regional service providers that cover specific transportation routes with specific customers or that offer niche services. Source: 10-K

The company does not have long-term contracts with many customers. If they decide to no longer receive DSKE’s services, it will be easy for them to leave. In this scenario, DSKE could experience a significant decline in sales and FCF. The valuation of the company will probably go down:

It is also quite risky that DSKE works with a significant number of independent contractor-owners. If some of them decide to leave the company or all decide to enter into negotiations with DSKE, the company’s EBITDA margins can drop significantly:

Shareholders could suffer significantly if DSKE announces certain synergies from acquisitions or other types of transactions. As a result, management may post lower EBITDA numbers and FCF expectations may decline. In the worst case, failed trades could be revealed by the media, leading to lower demand for the stock:

In addition, it could experience more significant dissynergies than expected, and the impact of the divestiture on its business, results of operations and prospects could be greater than expected. Divestitures may also involve a continuing financial involvement in the divested business, for example through warranties, indemnities or other financial obligations. Source: 10-K

Additionally, with growing capital expenditures, a conservative D&A and an effective tax ratio, the FCF margin should be between 4% and 2%. 2032 FCF would equal $23 million:

With an exit multiple of 7.7x EBITDA and net debt of $447 million, the implied price would equal $4. In my opinion and with the figures obtained in the previous case scenario, the downside risk appears lower than the upside potential:

As of December 31, 2021, the company had $147 million in cash, an asset-liability ratio of 1.19x, and $397 million in property, plant and equipment. I believe that most investment advisers will not be afraid of the financial health of the company:

DSKE works for a large number of clients from different industries. Also, DSKE seems to be storing fuel in underground storage, so the risks from rising oil prices don’t seem that great. Drivers also get gas from truck stops, where management has negotiated decent fuel prices. With all of this in mind and a direction giving a very favorable outlook for 2022, the current share price does not seem justified. DSKE is trading undervalued compared to other peers. The sum of discounted future free cash flows with a conservative WACC implies significant upside potential. In my opinion, DSKE is a buy.

Raising rates is a delicate but necessary balancing act