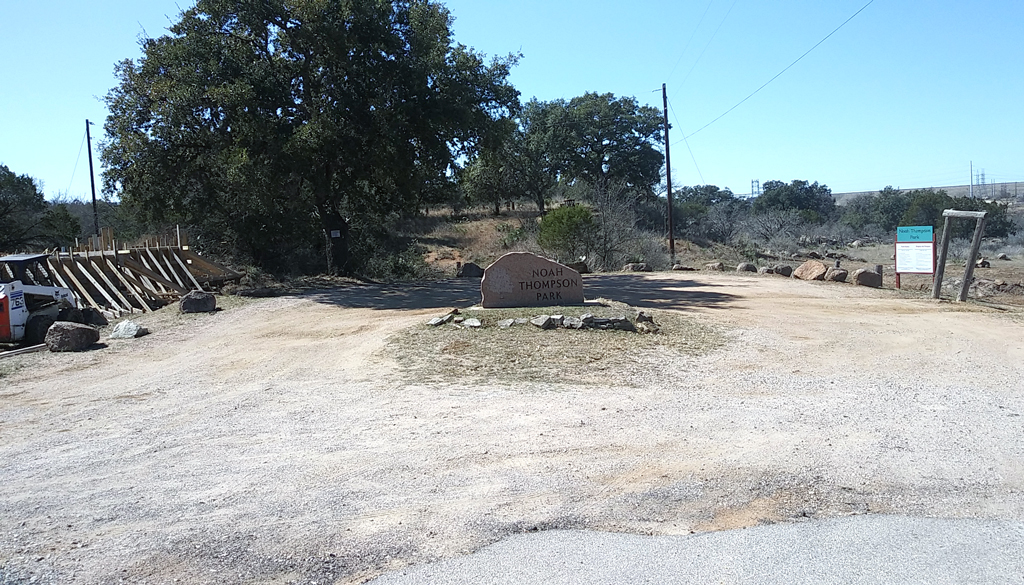 The cul-de-sac at Noah Thompson Park in Cottonwood Shores will soon be paved with the help of Burnet County road crews, one of several city improvements approved by City Council at a regular meeting on July 17 February. Staff photo by Jennifer Fierro

City improvements topped the agenda for the Cottonwood Shores City Council meeting on Thursday, Feb. 17, with water and sewage updates topping the list.

When that work is complete, which is expected to be by October, the city plans to focus its resources and attention on street repairs, City Administrator JC Hughes pledged.

The council took a step forward to make all of this happen by passing a resolution to issue notices to obtain bond certificates not to exceed $1 million for a new lift station, generators at facilities owned to the city and road improvements. The certificates will be closer to $525,000 when issued and are needed to cover a cash shortfall, Hughes said.

“Interest rates are at historic lows,” he said. “These are historic lows that we may not see again in our lifetime, and it’s a cheaper cost to taxpayers in the long run.”

The lift station will cost $503,150 to purchase and install, exceeding available funds by $239,000. The water and sewage line upgrades will cost $1.1 million, which comes from the $1.5 million bond certificates obtained in fall 2020.

Work will begin on the projects in the coming weeks. The council approved the contracts with M&C Fonseca Construction of Granite Shoals, the lowest bidder.

Leaders plan to use $304,000 given to the city by the American Rescue Plan Act of 2021 for generators at Raw Water Plant and Lift Station No. 5. The city received half of the money and awaits the other half, expected this summer.

These items total more than the ARP money will cover, leaving a deficit of $66,000. Generators are still needed for the new LBJ Lake Intake, Lift Stations Nos. 1 and 2, Police Station and City Hall, totaling $220,000.

The town hall also needs new software that can be used by all departments. The old software makes it difficult for staff to complete work in a timely manner, Mayor Don Orr said. Additionally, the company that created the old software recently sold off, leaving staff without the customer service needed to operate effectively. The board approved a $50,000 software contract with a new Dallas company, which will be covered by the new bond certificates.

These bond certificates will also cover $81,112 for generator contingencies and road repairs. The remaining $25,000 will go to Government Capital Securities, the company hired to publicize the city’s intentions to obtain the certificates and help it obtain them, Hughes said.

During the discussion, Orr presented numbers projecting how much money in property and sales taxes the city expects to collect in the future. It projected that $175,070 would be collected in 2023, $141,267 in 2024, and $165,049 in 2025. This does not include sales taxes from NXTLVL and TXB Cottonwood Shores, two new businesses in town. Both Orr and Hughes noted that the mayor’s projections are very conservative, meaning they think the city will collect more than the numbers project. The City’s reserve funds amount to more than $540,000.

“Our balance sheets are starting to look good,” Orr said. “I fought to make sure we had long-term reserves. I believe it is better to borrow money than to steal this reserve. It is my true opinion that we can afford to do this, and we should. We looked really tough from top to bottom. I hope you will accept.

The council did so, while also voting to honor part of Waste Management’s garbage collection contract which includes increased rates due to changing diesel costs and inflation. The increase will be passed on to residents, which will affect water bills in the spring.

“All cities (doing business with waste companies) have it in their contracts,” Hughes said. “It’s an adjustment.”

Council also voted to spend $10,000 to install 4-by-6-foot culverts and asphalt on a cul-de-sac at Noah Thompson Park. A Burnet County road crew will assist with the job.