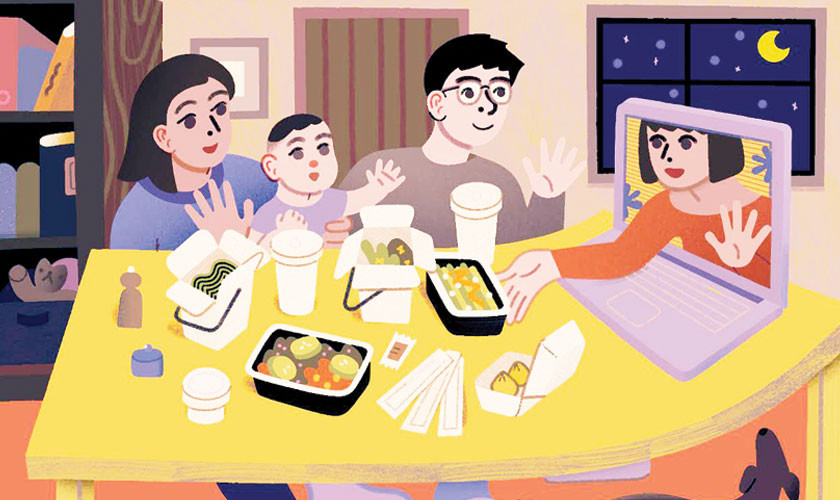 When I think of my childhood, images of snowy alleys in Murree, eating jamun from the trees in the backyard of our house in our Islamabad, shouting at “uncle challi-walay” in the streets for delicious corn sprinkled with spices and many other examples of childhood happiness fill my mind. But more than anything, the memory of my childhood makes me think of Aunt. Aunty is my grandmother’s sister, but for our family she is as important and influential as a tribal leader. My siblings and I were all born in her household, and she has been a matriarchal figure to us for as long as I can remember.

When we are children, things, ideas and people tend to float to the surface of our consciousness without our trying to make sense of them. As a child, I considered Auntie to be a special character who only existed with us. She was this strict headmistress who didn’t like anything abnormal and who would be very disappointed the day we missed a day of school. But she was also the one who let us all sleep in her bed and told us stories until she fell asleep and was woken up again to tell us more. She would miss no opportunity to secretly slip us money and throughout the year she would knit us all sweaters to wear in the winter. Aunty was just… Auntie. No more no less.

But change is inevitable, and we left Islamabad and Auntie’s house when I was about six years old. I grew up, and gradually perceiving what is acceptable in our society and what is not, I slowly realized how different Auntie had been – and still is – from what is considered a woman” normal” in Pakistan. Now I look at her as an elderly woman who is unmarried and has no children living alone in her house in Karachi, I see the visible quirks in her life. I knew she got married very young and the marriage didn’t work out. I didn’t really know more than that and it wasn’t something we talked about frequently in our family.

Last week I went to her house like my siblings and I often do on weekends and special occasions but this time I took her aside and told her I had to do a homework on a personality that I find unique and inspiring for a class. “Do not do this to me !” She exclaimed even before I told her of my plans. I expected that and knew it usually took more than one attempt to convince Auntie of anything. She finally gave in, but on condition that I keep her name private and refused to give her a photo. It is also a condition I expected and had to reluctantly accept.

We both sat at the dining table with our cups of tea in her sparkling clean little two-bedroom apartment, and I asked her to tell me anything she wanted about her life.

Born with our country in 1947, Aunty was the eldest of several sisters, her family belonging to Bihar in India. “Abba used to say, ‘girls don’t study’, so a maulvi would come and we would read the Koran. she said looking into space. “All our cousins ​​would go to school and we wouldn’t. But I memorized five chapters of the Quran. Aunty told me proudly.

When did she move to Pakistan? I asked him. This changed his expression to a troubled expression. “Some…things happened. When I was 12, my father arranged a marriage between me and my father’s brother’s son, who was about ten years older than me. The Nikah took place in just a few days and it was decided that I would live with my in-laws in East Pakistan until I was a bit older, then the Rukhsati would take place. My uncle was more progressive than my father and he wanted to take me with him and educate me. I noticed a grateful glint in Aunty’s eyes as she talked about her uncle.

In Dhaka, Aunty was enrolled in grade 6. She was a diligent student and excelled in her studies. “It was everything I ever wanted. My uncle granted every wish I had as a kid. Time passed and Aunty went through year after year with stellar results every time. Her husband, meanwhile, studied at university in another city. He came from time to time, but they rarely met. “I passed my Matriculation and then my Intermediate. My uncle was very proud of me and wanted me to study more. I did my baccalaureate and after that the political situation started to deteriorate. In 1971, a few months before the war broke out… I got a job offer at Islamabad and I moved there.

Aunty, of course, noticed my ill-concealed confused looks and said, “He (her husband) was never interested in marriage. He loved someone else and only said yes to marriage because of pressure from his father. He never accepted me as a wife and married someone else. I think that’s also a reason why my uncle did so much for me; he felt guilty for his son’s betrayal.

An awkward silence reigned in the air for a few moments, and I felt guilty for forcing Auntie to recall memories that were causing her pain. I tried to change the subject.

So, did she always want to be a strict school principal? I asked him lightly. She laughs, her shoulders shaking. “I’m not a director, but I started teaching and I loved it. I did it for years and years, and then the school where I taught made me principal. After moving to Islamabad, Aunty became a shining star in the family. “You start getting a different kind of respect when you win. I was no longer considered the ‘unlucky’ girl! I was supporting my family who had moved to Karachi. My mother (my great-grandmother) lived with me and I often took care of my sisters’ children. Your father lived with me most of his life. My family depended on me and cared about how I felt, so they didn’t push me too hard to remarry.

Many proposals have come for Auntie. She was young, educated and well-mannered, the golden-bahu potential of any “civilized” household. But she never accepted any. “I couldn’t trust anyone anymore. I had been alone for most of my life and everything worked the way I wanted. I got up at a certain time, got dressed, prepared breakfast, left for work, came back… everything happened according to a precise routine that I had set. I did what I wanted to do, when I wanted to do it. I couldn’t let anyone disturb this.

Dusk had almost fallen and Aunty got up to turn on the lights in the living room. It must have been difficult, though? I asked him. “Of course it was. People were raising their eyebrows, chatting and even asking me directly about my choices. But…it happened, what can we say? I told him that I meant how hard it must have been for her to be alone all this time.

Another awkward silence. Auntie picked up the cups we were drinking from and started bringing them to the kitchen. I stopped her and told her I would wash them. “No, I will.” She’s been like this for as long as I can remember. She will only let someone help her if she wants to. “Sometimes I feel a sense of regret…but it’s a big responsibility to have a family.” She says no more about it.

Aunty retired from her position as manager in 2007 and moved to Karachi where the rest of her family resides. Here she has lived in the same apartment for 14 years. The apartment is close to most of his nephews’ and nieces’ homes. So they and their families often visit Aunty.

At Aunty, life is predictable. It is immutable and runs like a clock. When we come to stay here, we have to eat what she cooks, wake up when she tells us, and sleep when she says. But often a strict routine is what you need to bring discipline in a whirlwind of events and changes.

Auntie’s house is safe. It is the house.

What a Federal Reserve rate hike means for you