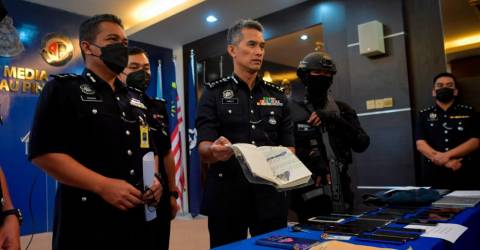 GEORGE CITY: Penang police crippled a non-existent loan syndicate which also made misdeeds and criminal threats after arresting 13 people in a raid on a luxury condominium, in Perda near here on June 15.

Penang Police Chief Datuk Mohd Shuhaily Mohd Zain said the success was the result of a raid by a Penang CID police team at 12:45 p.m. following reports of mischief and criminal threats involving the union.

“A police team first raided the condominium because they had received information about illegal money-lending activities, mischief by spraying paint and criminal threats made by a suspect living in the unit, but on the descent they found nine men and four women there.

“Investigations showed that the syndicate was using the condominium as a place to operate a non-existent loan syndicate by charging a processing fee to victims who wanted to borrow money from them,” he said during the interview. a press conference here today.

He said based on the investigation, the 13 suspects were members of a syndicate and their role was to contact the victims to offer them non-existent loans and each had also been given a script to deceive the borrowers.

Mohd Shuhaily said a police check revealed that a total of 132 non-existent loan investigation documents had been opened involving almost the entire country with losses amounting to RM1.914 million and the syndicate.

He said the modus operandi of the syndicate is to advertise their loans through social media such as Facebook and WhatsApp and then communicate with the victims before tricking them into asking them for a certain payment amount as a processing fee.

“There have been instances where the amount of money needed to be borrowed by the victims has not been given while those who get loans will be threatened, including some who had their houses spray painted, threatened and others,” he said.

He said based on the investigation, the syndicate had been in the business since last year and had moved from location to location in the luxury condominium within the past four months.

According to him, during the raid, the police confiscated 27 units of mobile phones, laptops, a car and 10 notes with the victims’ phone numbers and account numbers from the rented unit.

“Three of the suspects, all between the ages of 19 and 30, have criminal and drug backgrounds, all are now being referred for further investigation,” he said, adding that they were making the subject to investigation under Articles 427 and 420 of the Penal Code. . – Bernama